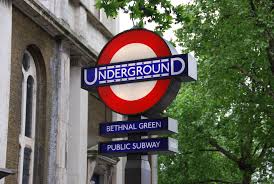 The Bethnal Green Tube Disaster happened on 3rd March 1943.  173 people died; men, women and children while trying to hurry down the steep steps to the station which was being used as an air raid shelter.  Growing up in East London with a mother who lived through the Blitz as a child, I can’t remember ever not knowing about this tragedy.  The story was told through my family and with grisly curiosity I can remember being quite young and asking about it time and time again as my mother insisted on holding my hand going down those steps on our way to the underground.  So it was something as a shock to me to discover as an adult how many people in Britain have never heard of it at all.

The story, for me, follows on from my previous post about my childhood in London.  There were endless stories of wartime Britain from my parents, grandparents and aunts and uncles.  I’ve often wondered about the accuracy of some of them given how memories change over time.  My mother is gone now as are all her brothers and sisters so I can’t ask for more detail and I wish I’d done it while I could.  But the story of the tragedy in March 1943 was very real.

The winter of 1940-41 was a nightmare for Londoners, with the bombing pounding their city.  On one occasion, London was hit for 57 nights in a row.  In December firebombs hit the city.  Air raid sirens were a constant background 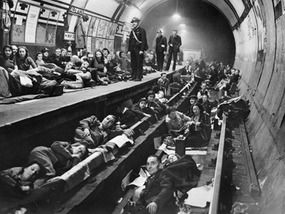 to daily life although there were many false alarms, but a lot of Londoners used to go into the shelters for the night just in case.  Many had Anderson or Morrison shelters in their back gardens but they were cramped with no light, little air and no toilet other than a chamber pot.  A lot of people preferred to use the Underground.

Bethnal Green was a new station as the Central Line had been extended from Liverpool Street in 1936, but work had been interrupted by the outbreak of War.  With the track not yet laid, there was plenty of room with up to 5000 bunks.  There was a sense of community with singing, laughter, tea urns and even a library and with bombs falling around them it must have given many a sense of security to be with their neighbours and friends.

Bombing was not as bad as it had been in previous years but on 3rd March 1943 it was expected to get worse as the RAF had  bombed Berlin quite heavily two nights earlier and people were expecting reprisals. With the sound of the Siren and the closure of the cinema, 3 buses had just stopped nearby and their passengers dashed for the shelter. A woman carrying a baby tripped and fell as she went down the steps to the platform. A man tripped over her and a domino effect started. At the top of the stairs came shouted warning of bombs falling and when a new and loud sound was heard people thought it was a new kind of bomb although it was actually a  new anti-aircraft rocket battery being tested in Victoria Park near by.

People panicked and pushed into the shelter unaware of the horror unfolding below them in the dark. The way was blocked but still people poured down. There were no handrails in the middle, no white edgings on the steps and no police on duty. It was dark and the steps were slippery from the rain. Around 300 people were wedged into the stairway – an area measuring approximately 15 x 11 feet. By the time they were pulled out, 27 men, 84 women and 62 children were crushed to death while 60 survivors needed hospital treatment.  In a horrible irony there was no air raid or bombs dropped that night in the East End.

There was a government enquiry although it’s findings were not published until the end of the war to avoid propaganda for the enemy and damage to British morale.  The entrance was poorly lit, with no central handrail and apparently the local council had asked permission to alter the entrance and put in a central handrail, but had been refused the funds by the Government of the day.  After the tragedy new handrails were installed on the steps down to the station. Each step was marked with white paint.

The official statement by the Ministry of Home Security states:

“According to accounts so far received, shortly after the air-raid Alert sounded, substantial numbers of people were making their way as usual towards the shelter entrance. There were nearly 2000 in the shelter, including several hundred who had arrived after the Alert, when a middle-aged woman, burdened with a bundle and a baby, tripped near the foot of a flight of 19 steps which leads down from the street. This flight of steps terminates on a landing. Her fall tripped an elderly man behind her and he fell similarly. Their bodies again tripped up those behind them, and within a few seconds a large number were lying on the lower steps and the landing, completely blocking the stairway. Those coming in from the street could not see what had taken place and continued to press down the steps, so that within a minute there were about 300 people crushed together and lying on top of one another covering the landing and the lower steps.
“By the time it was possible to extricate the bodies it was found that a total at present estimated at 178 had died and that a further 60 were in need of hospital treatment. Statements from a large number of eye-witnesses and members of the police and Civil Defence services make it clear that there was no sign of panic before the accident on the stairs. No bombs fell anywhere in this district during the evening. Preliminary reports received by the Home Secretary and Minister of Home Security indicate that police, wardens, soldiers, W.V.S. and civilians worked hard and well to rescue the victims. Mr. Morrison has instituted the fullest inquiries to establish in greater detail what took place and to see whether any structural or administrative weaknesses have been brought to light”

The injured were taken to hospital in Whitechapel and the dead were taken to the mortuary there on carts and buses.  When it became overcrowded the bodies were stored in St John’s Church opposite the tube station.  Many of the victims were later buried in Tower Hamlets Cemetery, which was cleared by members of the Drapers Company with help from the Friends of Tower Hamlets Cemetery in time for the 60th anniversary. Others are buried in Manor Park Cemetery and a few elsewhere.

Because of the government’s desire to keep the tragedy quiet while war was still going on, those involved were told to keep quiet and not say what had happened.  A report was filed by Eric Linden with the Daily Mail, who witnessed it but it never ran. The story which was reported instead was that there had been a direct hit by a German bomb. The results of the official investigation were not released until 1946.  Everybody in the East End knew the truth but in the days without the internet and social media it did not filter out to the country as a whole.  The press were silenced. There was no counselling in those days and PTSD wasn’t recognised.  People were told to just get on with their life.

There is a list of the dead on the memorial website, and one of them was a twelve year old boy called James William Taylor.  Jimmy was my mother’s first cousin, living within a few minutes of her and in the close knit community of 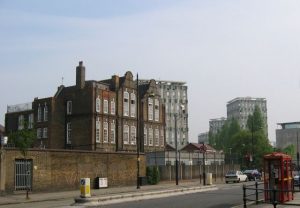 the East End he attended Bonner Street School with her and her brothers and was a close part of her extended family.  My mother and her brothers heard about the disaster from some other children on their way to school and were told that the bodies were being taken out and laid out on the pavement waiting to be transferred.  With the grisly curiosity of wartime children they took a detour to see them.  Only later did they find out that one of the hastily covered bodies laid out beside the road was their cousin Jimmy.

Thinking about this tragedy in light of the recent horrible events in London has made me realise how much times have changed.  It is inconceivable to us that families, including children like my mother, were allowed – in fact expected – to cope with the reality of a tragedy like this without help or counselling or even without financial support.  Women who lost their breadwinner in the tragedy faced hard times with their children.

Surprisingly my mother used to tell me that she remembered surprisingly little sense of outrage or anger at the government either for the disaster or the cover up.  Perhaps that was because she was a child but also it was wartime and everybody had been taught that ‘careless talk costs lives’.  There were no internet groups on Facebook to stir up anger and resentment and animosity, there was just the local community which offered comfort and support and practical help to those in need.  What blame there was landed upon the local council since they were not allowed to publish their requests for funding to improve the entrance, given the number of people using it.  But in wartime London, protests were fairly muted.  People had other things on their minds and it was not until after the war that the full truth gradually emerged and public anger grew including a number of court cases.

For many years the only memorial was a small plaque on the stairway, the one which used to spark my curiosity as a child but in 2007 local residents, including many who had lost family in the tragedy and one or two survivors, formed a charity for a proper memorial to the worst civilian disaster of the Second World War.  Their web page is well worth a look, as it tells the story in far more detail including very moving accounts of survivors.

The memorial, called A Stairway to Heaven is finally being unveiled on Sunday 17 December 2017.  More than 70 years after the tragedy, those 173 people, including my first cousin once removed, are being remembered.  Most of those who survived the disaster are gone now, but those who remain have never forgotten.

My mother didn’t spend all her childhood in London, she had two spells of evacuation, but she had vivid memories of the time she was there and she was a good storyteller.  I’m going to write them down and perhaps get my sister and cousins to dredge up their memories of their parents’ stories.  It’s very easy to think there is plenty of time.  I wish I’d asked both my parents a lot more and written it down so that I could remember it more clearly. 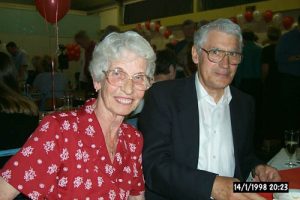 As a history graduate and historical novelist, perhaps it should be my job to record the family history as well so that all our children can benefit from it.