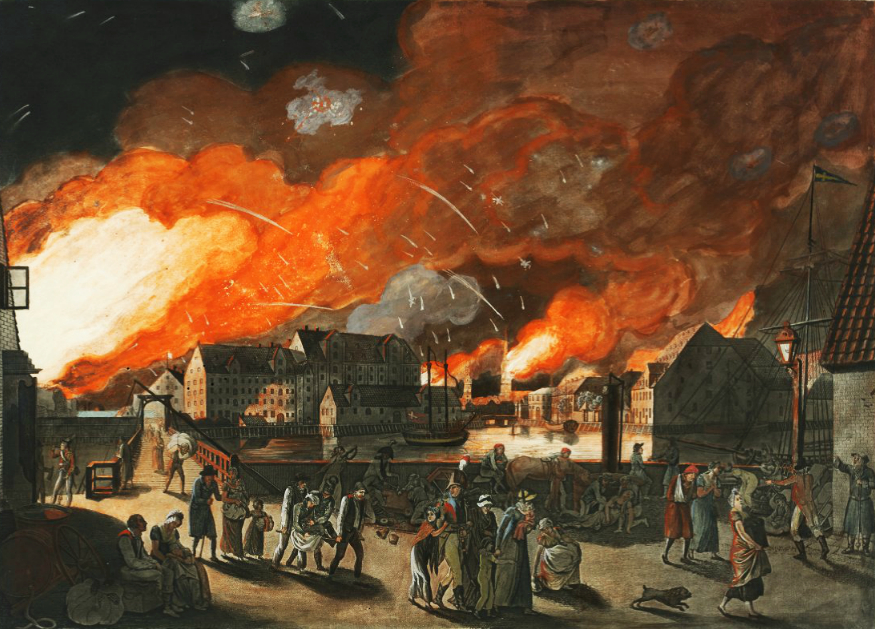 The bombardment of Copenhagen in 1807 occurred when Britain carried out an attack on a neutral country in order to either destroy or capture its fleet to prevent it falling into the hands of the French.  This little known action of the Napoleonic Wars was seen by many as a stain on the British character although the government remained steadfast in its belief that the attack was an unpleasant necessity.

In 1806 Napoleon launched his Continental System which was designed to paralyse Great Britain through the destruction of British commerce. The decrees of Berlin in 1806 and Milan in 1807 proclaimed a blockade: neutrals and French allies were not to trade with the British.  The Continental System damaged some English industries, but as the British had an overwhelming superiority at sea, enforcing the system proved too difficult for Napoleon. His efforts to police his blockade stretched French forces too thin, and he was never truly able to make it work.

Britain’s first response to the Continental System was to launch a major naval attack on the weakest link in Napoleon’s coalition, Denmark. Although ostensibly neutral, Denmark was under heavy French and Russian pressure to surrender its fleet to Napoleon. Despite the defeat and loss of many ships in the first Battle of Copenhagen in 1801, Denmark-Norway still maintained an impressive navy. Most of the Danish army was at this time defending the southern border against possible attack from the French.

There was concern in Britain that Napoleon might try to force Denmark to close the Baltic Sea to British ships, perhaps by invading Zealand.  The British believed that access to the Baltic was vitally important to Britain for trade, raw materials for building and maintaining warships and Royal Navy access to Britain’s allies Sweden and originally Russia against France.  The British thought that when Prussia was defeated, Denmark’s independence looked increasingly under threat from France and had previously tried unsuccessfully to persuade Denmark into a secret alliance with Britain and Sweden.

On 21 January 1807, Lord Hawkesbury told the House of Lords that he had received information from someone on the Continent “that there were secret engagements in the Treaty of Tilsit to employ the navies of Denmark and Portugal against this country”.  He refused to publish the source because he said it would endanger lives.  The reports of French diplomats and merchants in northern Europe made the British government uneasy, and by mid-July the British were convinced that the French intended to invade Holstein in order to use Denmark against Britain.

After a wealth of diplomatic to-ing and fro-ing, Canning received intelligence from Tilsit that Napoleon had tried to persuade Alexander I of Russia to form a maritime league with Denmark and Portugal against Britain.  Spencer Percival, the Chancellor of the Exchequer wrote a memorandum setting out the case for sending forces to Copenhagen.  With some reluctance, the King agreed.

The British assembled a force of 25,000 troops and Canning offered Denmark a treaty of alliance and mutual defence, with a convention signed for the return of the fleet after the war, the protection of 21 British warships and a subsidy for how many soldiers Denmark kept standing. On 31 July, Napoleon told Denmark to prepare for war against Britain or else France would invade Holstein.  Neither France nor the British persuaded the Danes to end their neutrality, so the British published a proclamation demanding the deposit of the Danish fleet; the Danes responded with what amounted to a declaration of war.

The Danish forces in the city amounted to 5,000 regular troops and a similar number of militia. Most of the civilian inhabitants of Copenhagen were evacuated in the few days before Copenhagen was completely invested.

On 26 August, General Sir Arthur Wellesley was detached with his reserve and two light brigades of British artillery, as well as one battalion, eight squadrons and one troop of horse artillery from the King’s German Legion to disperse a force which had been sent to relieve the beleaguered city. On 29 August, at Koge the British force overpowered the Danish troops, which amounted to only three or four regular battalions and some cavalry.

The Danes rejected British demands, so Lord Cathcart gave the order for the British army batteries assisted by the fleet under Admiral Gambier to bombard the city from 2 to 5 September 1807. In addition to the military casualties, the British bombardment of Copenhagen killed some 195 civilians and injured 768.  The bombardment included 300 of Congreve’s rockets which caused fires.  Due to the civilian evacuation, the normal firefighting arrangements broke down and over a thousand buildings were burned.

On 5 September, the Danes sued for peace, and the capitulation was signed on 7 September. Denmark agreed to surrender its navy and its naval stores. In return, the British undertook to leave Copenhagen within six weeks.  On 7 September 1807 Peymann surrendered the fleet which was either captured or destroyed to stop it falling into the hands of the French.  On 21 October 1807, the British fleet left Copenhagen for the United Kingdom but Denmark remained at war with them until 1814.  There were attacks in Parliament on the government’s decision to invade and bombard a neutral country but Canning remained convinced that he had made the right decision.

An Unwilling Alliance, published in April 2018 was a new venture for me in several ways.  It is the first book which is partly set on the Isle of Man where I live, and Captain Hugh Kelly and Roseen Crellin are both Manx.  I have been asked fairly frequently if I intend to write a book with a Manx setting.  I wanted to do so but since the Napoleonic wars were a long way from Mann, the obvious setting was the navy since many Manxmen served with great distinction, most notably Captain John Quilliam RN who was first lieutenant aboard the Victory during Trafalgar.  Writing about the army has become second nature to me; the navy took some work but I loved writing it and am currently working on Hugh Kelly’s next adventure which will take him, along with the second battalion of the 110th, on the disastrous expedition to Walcheren in 1809.

The other joy of An Unwilling Alliance was that it gave me an opportunity to combine both the army and the navy.  Joint operations were very common then as now and a lot more difficult given the limited communications of the day.  Officers and men on both sides had a tendency to assume that their branch of the armed forces was the best and jokes were common but there was genuine resentment in some cases.  If a joint operation went wrong each side often blamed the other as a matter of course; poor John Pitt, Earl of Chatham definitely came in for some of this after the disastrous Walcheren campaign in 1809 where blame could probably have been shared between the army, the navy, the planners of the operation and sheer bad luck.  I have given myself the challenge of trying to convey some of this feeling at Copenhagen, where at least one of the army commanders, Sir Arthur Wellesley, would have done things very differently had he been given the choice.  And then there is genuine cooperation and the beginnings of friendship between Captain Hugh Kelly, my down-to-earth, plain-speaking Manxman and the flamboyant, newly-promoted commander of the first battalion of the 110th, Major Paul van Daan.

Finally, an Unwilling Alliance gave me the opportunity to go back in time from Wellington’s Peninsular Wars where the 110th had been fighting for the last four books and take a look at an earlier episode in Paul’s history which was briefly referred to, but not described, in An Unconventional Officer.  It was an odd experience to look back at a younger Paul and remember all the lessons he hadn’t yet learned in 1807 and it also reminded me somewhat painfully why keeping detailed character lists is so important when writing a historical series.

In terms of historical sequence, An Unwilling Alliance fits in at the end of chapter seven of An Unconventional Officer, when Paul has just been promoted to major and given the news that the battalion is being posted to Denmark under Sir Arthur Wellesley.  Paul is twenty-five and still has a lot to learn about how to manage the army, his temper, his love life and his unemotional commander.  Captain Hugh Kelly is thirty and started out life as a farmer’s son on the Isle of Man; he came up the hard way and has a lot of experience that Paul still lacks.  Watching them get to know each other was a genuine pleasure and I hope they have the chance to meet up again in the future.

An Unwilling Alliance was published in April 2018 – you can read an excerpt here. My next book, which is centred around the Walcheren expedition, is titled This Blighted Expedition and will be published later this year.