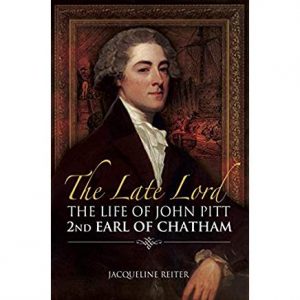 I came across the Late Lord: The Life of John Pitt – 2nd Earl of Chatham completely by accident.  I was trying to remember the author of a novel about the younger Pitt that I’d read as a teenager and asked about it on a site for historical novelists.  I got a response from Jacqueline Reiter, who had recently published her first non-fiction biography and was soon to publish her first novel, Earl of Shadows, about the same, little known historical character.

A conversation started which revealed that we shared an interest in a similar time period.  I was working on the Peninsular War Saga; she was busy with the Walcheren campaign.  We talked about our various books and I was curious enough to buy the biography.  I had studied eighteenth century politics at A level and knew a fair bit about Pitt but very little about his elder brother.

The Late Lord is one of the best historical biographies I’ve ever read. I knew a fair bit about the period, partly from A level and partly through research for my own historical fiction, but along with most other people I suspect, I knew very little about the Second Earl of Chatham.

The book is a fantastic blend of research and story, and the writing style is easy and flows well. There are plenty of references, but the author manages to make this a book which is simply good to read, despite the obvious scholarship behind it.

By the end of it I felt I knew a lot more about this period of history and a huge amount about John Pitt, both his personal and public life. The author doesn’t gloss over any of his faults but manages to present a sympathetic and likeable portrait of a much maligned and often ignored historical character.

In addition it is an excellent source of information about the eighteenth century political scene, with a wealth of characters against the backdrop of Court, Parliament and the naval and military campaigns against France where reputations were won and lost.

This is an easy and intelligent read for anybody wanting to get an overview of this period.  I loved it, I hope she goes on to write more, and I would recommend it to both historians and the general reader.