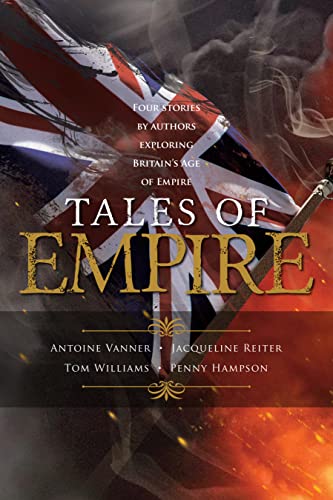 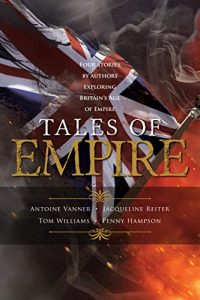 I should start by freely admitting that I bought this anthology having read all of these authors before. This is a small collection, but it pulls together four very different views of the days of Empire from four very good writers.

Tom Williams ‘The Tiger Hunt’ is an episode from the life of James Brooke and John Williamson, the protagonists of ‘The White Rajah’. I thoroughly enjoyed the three Williamson novels and would highly recommend them. This story brings the contrasts of the two characters to life with a deft touch and paints a vivid picture of a bygone era. I really enjoyed it.

I know Penny Hampson for her intelligent Regency novels. This story was new to me and is a well-written tale of an honourable man who accidentally runs up against the darker side of nineteenth century industrial England and chooses not to be a bystander when faced with the suffering of others. There’s also a dog. I loved it.

I’m a huge fan of Antoine Vanner’s nineteenth century naval hero and it was great to step back in time and meet him as a young officer just embarking on his career. The story deals with the navy’s campaign against illegal slave trading once Britain had ended its involvement with the trade. Great story.

Jacqueline Reiter is better known as a historian than a writer of fiction, but I loved her historical novel about John Pitt, 2nd Earl of Chatham. Chatham was also the subject of her first biography and is the central character of this moving short story about Chatham in later life. The author combines a glorious sense of period and meticulous characterisation with the themes of grief, loneliness and duty. Also horses. My favourite, but only by a whisker.

I can’t find fault with these stories. I read them as a fan both of the authors and the genre, but I would really recommend them as an excellent introduction to these writers and their works. You may well start with this and find that it leads to the discovery of a whole new range of historical fiction. At the very least you’ll have read four entertaining and well-written stories and you’ll have learned something along the way.