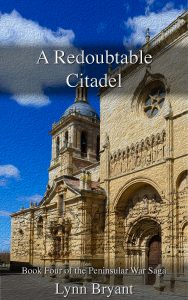 The storming of the two great Spanish border citadels of Ciudad Rodrigo and Badajoz were the first step in Wellington’s campaign of 1812.  It was essential for him to hold these fortresses, known as the keys to Spain and he pushed his army to it’s limits in order to capture them, with huge loss of life and appalling loss of discipline.

A Redoubtable Citadel is the fourth book in the popular Peninsular War Saga, telling the story of Paul and Anne van Daan and the officers and men of the 110th light infantry through the bloody campaigns of 1812.

(From A Redoubtable Citadel by Lynn Bryant)