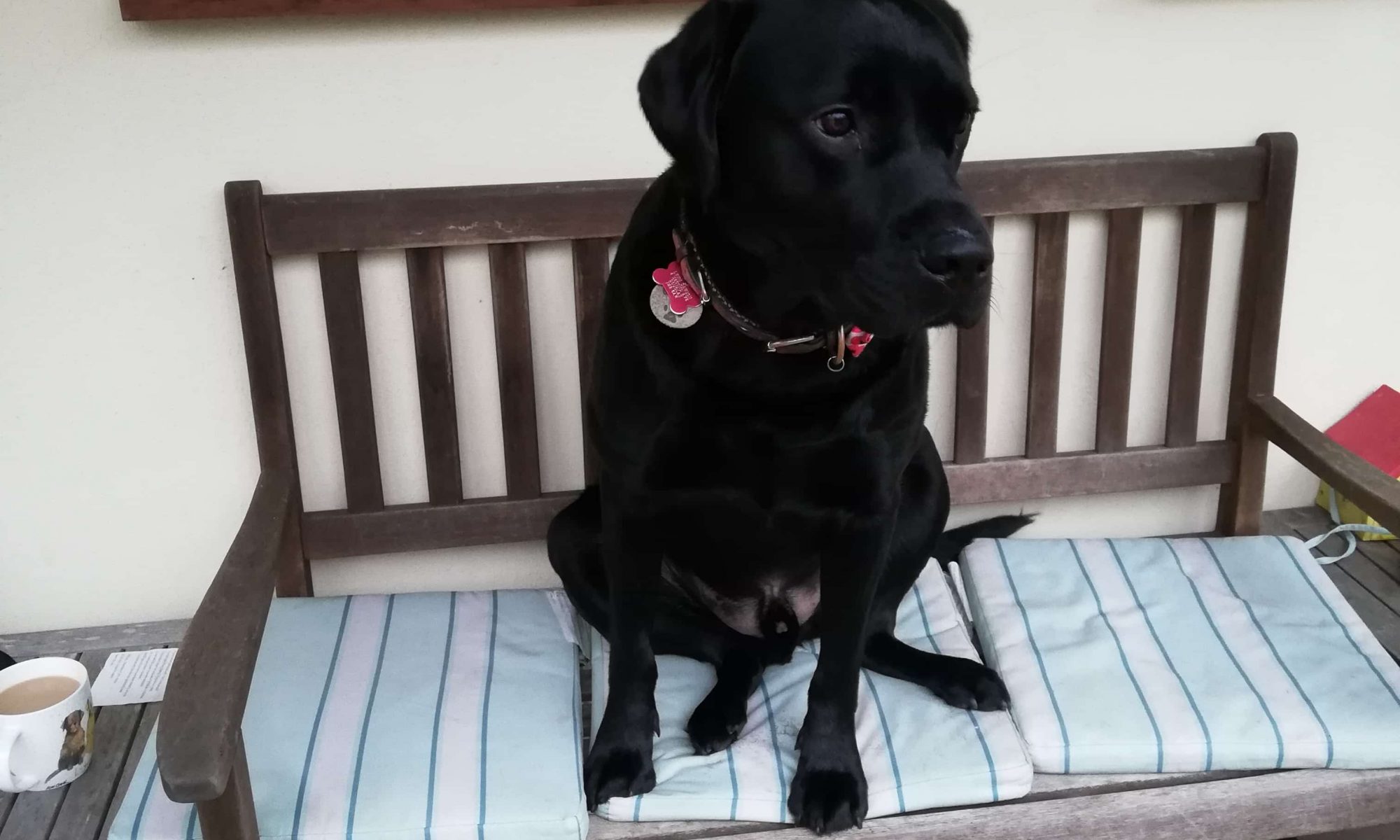 It’s the first proper day of lockdown on the Isle of Man. 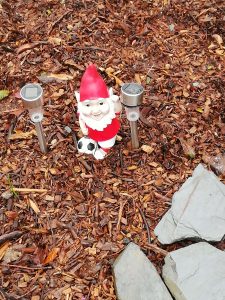 I awoke with great intentions of getting up early and taking Oscar for a walk, but grey skies and a steady drizzle put paid to this. Oscar got as far as the front gate, sneered a bit, did a wee over the footballing garden gnome as he usually does, then went back inside for breakfast. After that he headed for the sofa with the air of a dog who has seen what the outside world involves and has no further interest in it. We’ll try again later.

We’re working in the living room today, since my son is now working at home for three weeks so I’ve heroically given up my desk to him, as multiple zoom meetings are difficult to manage in the middle of family life. I don’t mind working in the living room, but today it includes my daughter writing an essay discussing whether or not the seventeenth century could be called a century of revolution. My girl is a very vocal worker and likes to share the experience of essay writing with anybody who is willing to listen. Or anybody who would rather not listen. It goes rather like this.

“Mum, listen to my opening paragraph.”

“Have you changed it since last night?”

“Why don’t you rewrite it and then read it to me.”

“Because you’ve probably already forgotten it from yesterday, and I want you to tell me if you think the new one is better or worse.”

“What makes you think I won’t have forgotten it by the time you’ve rewritten it.”

“Don’t be silly, you’re not that demented yet.”

That’s possibly true, but I’m going in the right direction.

One of the things I enjoy about lockdown is how quiet it it. We live fairly close to a main road, and though the traffic here is nothing like the traffic in the UK, we can hear a steady stream of cars when we’re outside in the garden during rush hour. This morning there was nothing, just the pitter patter of raindrops and the sound of a seriously aggravated bird in the Rowan tree. I’ve no idea what upset him this morning, maybe a seagull got to his breakfast first, but it was the most aggressive tweeting I’ve ever heard. Must put bird food out shortly to shut him up.

Going into the kitchen was the first irritation of the day. As my son and his girlfriend cooked last night (delicious stir fry with crispy chicken) I cleared up. It’s good for my mood to come down to a clear kitchen so I religiously loaded the dishwasher and washed all pots and pans. Coming down this morning, I realised that the Phantom Night Chef had been at work. My son has the ability to eat at all hours, and it doesn’t occur to him to make do with a packet of crisps if he wants a snack at midnight. God knows what he cooked, but the smell of garlic is going to keep us safe from vampires for months. Ignored pots and pans and sat down to work.

“Mum. Listen to this and tell me if you think I’ve got two separate arguments in this paragraph.”

“You want me to read another paragraph?”

“No, I want you to look at this video of polar bears playing in the snow.”

Oscar jumps off the sofa. He understands the word lunch. 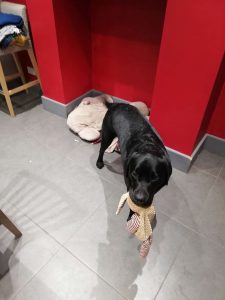 I managed to get a good couple of hours in this afternoon and I was pleased with what I’d done. The rain finally stopped so I called Oscar for his walk before it started again. Oscar looked at me. I think he’d decided we weren’t going to do that today. Eventually, grumbling a bit, he heaved himself off the sofa. There was a bit of a discussion in the kitchen about whether we could take Stripy Bunny with us. Getting bored with the tug of war, I gave in. Three minutes up the road, I stooped to pick up Stripy Bunny and put him in my bag. We’ve done this before. 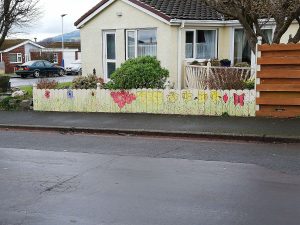 There are some things about the previous lockdown that I rather liked. One of them is the variety of artwork that sprang up on fences and walls around the island. I’m not sure if they were done by bored children or if some of the adults decided to break out a bit during their time off, but they do brighten the place up on a grey afternoon. This one is in the next road to us and I’m very fond of it.

In the same road, I could hear loud music. As I reached the house, the garage door was open and a young couple were on the driveway washing their cars with a hose. It was freezing out, but they were wrapped up in hats and scarves and dancing around to the music as they worked. Spotting us, she grinned and waved, while he looked a bit embarrassed but then waved as well. Oscar was dying to go and say hello but we’re socially distancing so we didn’t.

After half an hour, I remembered the things I love and the things I don’t about lockdown. The lack of traffic is a joy. We have at least one quite awkward road to cross on this route, and it’s bliss just to stroll across. On the other hand, the island is now full of people with bored kids and it’s finally stopped raining. The world, his wife, their entire families including their dogs were out and about, with bikes and scooters. Oscar’s tail was wagging frantically at the sight of ALL THE NEW FRIENDS!!!!! Mine was not.

“But she’s smiling at me, Mum, she wants to play.”

On the footbridge we met a small boy wheeling his bike, probably about eight, whose face lit up.

“Can I stroke your dog?”

Too late. Clearly this kid comes from a dog loving family and his arms were around Oscar before I could say any more. Oscar enthusiastically returned the love. I waited a moment, at the length of the lead, then gave a gentle reminder to wait for permission next time,  because of social distancing and because the dog might not be friendly. I got a big gappy grin in return.

“Oh, it’s all right. I could see he was friendly. And you as well.”

Sussed out by an eight year old, we carried on.

Further down the narrow path we met a selection of people with dogs, kids, bikes and scooters. It was a challenge, but we all managed to keep the distance until we came across an older couple with a small dog which was off the lead. I pulled Oscar over to the side yet again, but their dog waddled up to say hello.

“It’s all right, dear,” the old lady said. I gritted my teeth a bit. It was all right, but she didn’t actually know it was going to be, not knowing my dog, and if they’d got into a spat, we’d have had to get very close to separate them. Dogs are supposed to be on a lead down this path, but usually I wouldn’t care. This week I’m trying to do the right thing.

Almost home, and we met a genuine challenge, The dog was huge, a big black bear of a hound, being walked along the narrowest bit of pavement by a woman. She saw us and paused, looking around. There was nowhere to pull over and it was clear that both dogs wanted nothing more than a play session right here and now. Which would be great on the beach but this was not the time or place. I called Oscar to heel and crossed the road for a minute, out of the way. She passed with a big grateful smile and a wave. Her dog glared at me for spoiling his fun.

“He looked like fun, Mum, why couldn’t we play?”

“Not by a road, Oscar. Cheer up, it was a nice walk and if it’s better weather tomorrow, we’ll take the car and go somewhere I can let you off for a run.”

“Here we are. Let’s get your lead off and have a drink.”

“And dinner. Is it dinner time, Mum?” 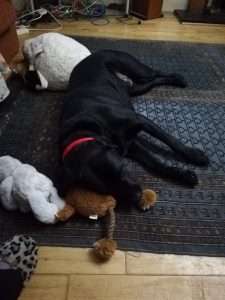 “Boring. Might have a nap then. I’ll just settle here by your feet with Owl and Floppy Bunny and Hilda the Sheep.”

Lockdown plus number 2: People are so friendly out and about. Although I loathe the phrase with a passion, I have to admit there is a genuine sense that we’re all in this together. Except when I remember the Panic Buyers Without a Brain Cell but as I avoided shops today, I could forget about them. 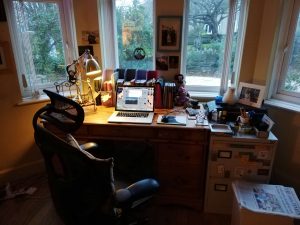 Lockdown minus number 2: I miss working at my own desk in my own study. I know it makes more sense for my son, but I still miss it.

2 Replies to “Lockdown with Oscar: Day 1”