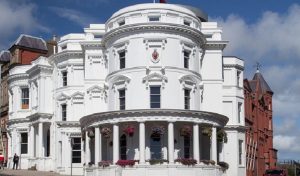 Lockdown with Oscar Day -1 has come about following an announcement from the Chief Minister of our lovely little island, to say that Covid has reared its ugly head in the Manx community again and we’ve all got to stay at home for three weeks. It’s the national equivalent of being sent to the naughty step to think about what you’ve done.

Those of you who have been following the adventures of Writing with Labradors through this tumultuous year will be aware that on the Isle of Man, we’ve had a lot more normal life than many people. We were in lockdown during March as cases spread, and there were some hospitalisations and sadly some deaths.

At the end of it, our government set out a series of stages towards complete normality. They also closed our borders to pretty much everybody, including, for a time, residents who were unlucky enough to get stuck overseas. The Isle of Man was having nothing to do with Covid, and with a small island, it proved relatively easy to contain the spread of the virus. One minute we were socially distancing and the next minute the pubs, clubs, restaurants and theatres were open and as long as nobody wanted to travel off-island, life was pretty good.

The island’s Covid-free life attracted a fair bit of attention from the media, particularly in relation to some of the methods used to ensure compliance. The two-week quarantine for anybody returning from the UK or abroad was strictly enforced, and several people were gaoled for breaking the rules. It’s reasonable to ask questions about such draconian measures, but it’s also hard to be mad when you live here and they proved so effective for such a long time.

The Manx government said all along that at some point Covid would return, and it appears that after a number of very well contained cases among people self-isolating on return, something went wrong with the system. On a small island, rumours fly around very quickly, and there have been rumblings of community cases all week. At some point during yesterday, the Council of Ministers apparently decided that there were enough to make another outbreak very likely, and decided to lock down. There were no hints or warnings, no Tier system and no gradual progression. We’re going from parties to full lockdown in just over twenty-four hours.

The lockdown has been announced for an initial period of three weeks, presumably to give them the chance to work out just how much this has spread into the community. In three weeks time it should be possible to know in such a small place. It was formally announced at 6pm yesterday and begins at midnight tonight, to give businesses a chance to get things in place. Of course given that this is the Isle of Man, most people knew by midday. I didn’t, being wholly engrossed with finishing chapter one, which is why when I popped to the supermarket at 4.30pm for chicken, potatoes, coriander and bread, I was astonished to see the car park jammed as if it was Christmas and the shelves looking as though a Plague of Locusts had been on speed.

It’s well-known that during the last Manx lockdown, we were starving over here. Boats didn’t travel, supermarkets never stocked their shelves and those who didn’t panic buy eighty-six packets of toilet paper and a jumbo bag of tagliatelli almost didn’t live to tell the tale. Funnily enough, though, nobody knows anybody personally who starved during those weeks, and personally I didn’t see much evidence. Certainly there were queues due to social distancing, the weekly family outing to the supermarket was severely curtailed by restricting shopping to one household member at a time, and the whole thing took a lot longer and was more tedious than ever. Still, we all survived.

The danger must have been real, though, because even before the announcement was made yesterday, they were out in their droves on a frantic quest to ensure that half the island’s population can build a castle from bog roll and bags of flour while the other half can’t buy basic foodstuffs for one meal. I managed all right, by driving between four shops to pick up five items. There was no describing my mood when I finally got home. Dry January will have to wait.

Today being Lockdown Eve, I ventured out again for my last shop without a face mask. There’s still no fresh chicken on the island, but I managed to get enough frozen for two meals along with a few other essentials. At home I got out the shopping list and menu planning notebook we used in the summer and prepared for a major planning session. With five adults, one of whom is veggie, one fussy, one wanting to lose weight and being convinced that too much beef over Christmas gave him gout, the next three weeks should be a joy. 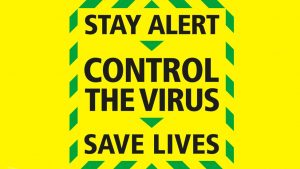 So why this diary? Well, I’m going to be honest with you and say that I’m not that good at lockdown. It’s peculiar, because a lot of the things people miss, I don’t really do that often anyway. I work from home, as does my husband, and we don’t eat out that often apart from special occasions and don’t go to many parties. I don’t even do that much recreational shopping apart from bookshops. You would think that apart from the Plague of Panic Buyers, lockdown wouldn’t really affect me that much. Nevertheless, both during the previous lockdown and my own two week enforced quarantine when I visited the UK to see my sister, my mental health was very poor. I was snappy and irritable with my family, furious with every public figure who pontificated on how we should all Stay Home to Save the Lives of All Lerts and I had to put on headphones during the evening clapping for the NHS in case I disgraced myself by sticking my head out of the window and saying things that shouldn’t be said. While my adorable family quickly came to terms with the new circumstances yesterday evening while they were cooking the chicken I’d taken two hours to buy, I had to shut myself in my room to avoid their relentless positivity and good cheer.

I’ve spent some time analysing why being confined to quarters affects me so badly, and I’ve come to the conclusion it’s because I’ve never been very good at following orders. I mean, I can do it.  A lot of the rules of civilised living make a lot of sense to me, and when the law tells me to put on a seatbelt or not to bean the annoying woman who is queue-jumping with the bottle of ketchup I’m trying to purchase, I can accept it with good grace. I understand those rules and they make perfect sense to me, so I can override my instinct to kick off and be a grown-up about it.

The post-Covid world is another matter. Whatever side of the debate you happen to fall on, the message is clear that there is no debate. It’s been decided for us, and our every movement is now subject to control, sometimes at a moment’s notice. The great and the good, along with the experts on social media tell us how we must think and feel as well as what we must do, and that does something to me. If I’m given the information needed, I will almost certainly decide not to set foot outside my front gate while there is even the remotest chance I’ve got asymptomatic Covid, but being ordered to stay there by somebody else, hurts my soul. Not being allowed to express how miserable it makes me because we all have to be saintly in both word and deed, adds to the pain.

Before this, the closest I’ve come to these feelings is when I’m travelling through airport security post 9/11. While officious airport employees scream instructions over the bellow of trapped and miserable humanity being treated like sheep, I stand in line juggling laptops, phones, toiletries and the half-bottle of water I’d forgotten was in my bag, composing a Paul van Daan-style rant in my head. My family, who know me, huddle close around me, saying soothing things and trying to protect those around me from an impending explosion. I have never travelled with Ryanair.  My family don’t trust me to do so. 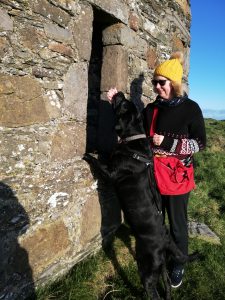 I know myself. I don’t want a platform to rail against the inevitable, I just want to stop feeling so bad while its going on. My daily walks with Oscar soothe my soul, and it was a very bad moment yesterday when conflicting information seemed to suggest that we were going to be expected to wear a face mask in order to go for a walk. Fortunately, that has now been cleared up, so Oscar and I will be out and about as usual. If we manage to see half a dozen people from a distance on our usual walks, it’s surprising, so I think we’ll stay safe.

There is always a lighter side to any situation, and that’s probably what I need to find. Me being angry and miserable doesn’t help those who have been ill with Covid, or any other disease. It also doesn’t hurt them. It only hurts me. So welcome to Lockdown with Oscar here at Writing With Labradors, as we share our doings and the ups and downs of lockdown life.

Lockdown plus no 1: It’s not even officially started yet, but already my family are jumping in to offer to cook dinner. It’s important to show this kind of appreciation to a wife and mother who might turn Pterodactyl at any moment. I wonder if there’s a way I can translate this into normal life.

Lockdown minus number 1: My son and his girlfriend and my daughter are making rumbling noises about movie nights, quiz nights and other forms of forced family fun. I feel like a deer caught in the headlights. 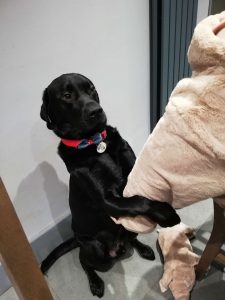 Oscar’s Contribution. Oscar waited until I had gone to do my Lockdown Eve shopping before throwing up violently all over his bed and the kitchen doormat. Oscar is very seldom sick. I think he was making a point here. Now he is doing his meerkat impersonation in the hope of more food.