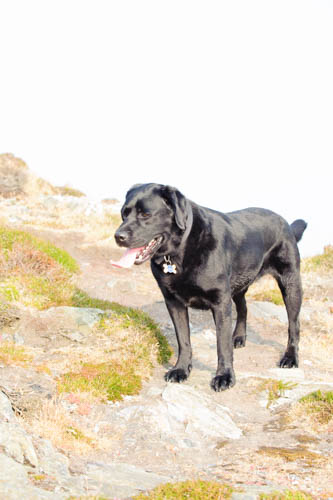 As it is Hop tu Naa here on the Isle of Man (Halloween to the rest of you) I thought I’d share one of our local legends, the story of the Moddey Dhoo, or black hound, which according to Manx folklore haunts Peel Castle. 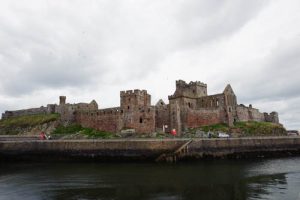 Peel is on the west coast of the Isle of Man, a pretty little town, with the ruins of a magnificent castle, originally built by the Vikings, standing on St Patrick’s Isle. The castle was built in the eleventh century, originally of wood, and was added to over the centuries. The cathedral was also located on the island until it was abandoned during the eighteenth century. Peel Castle is now owned by Manx National Heritage.

The original written source of the story of the Moddey Dhoo comes from English topographer and poet George Waldron, who wrote his History and Description of the Isle of Man, first published in 1713. This is his version of the legend:

“They say, that an apparition called, in their language, the Mauthe Doog, in the shape of a large black spaniel with curled shaggy hair, was used to haunt Peel Castle; and has been frequently seen in every room, but particularly in the guard-chamber, where, as soon as candles were lighted, it came and lay down before the fire in presence of all the soldiers, who at length, by being so much accustomed to the sight of it, lost great part of the terror they were seized with at its first appearance.”

There was apparently a passage which crossed the church grounds and led to the room occupied by the captain of the guard, where the Moddey Dhoo used to appear as it grew dark, returning the same way at dawn. Waldron reports that one drunken guard ignored the usual procedure of locking the gates of the castle in pairs, and did it alone. After locking up, the guard was supposed to go along the haunted passage to deliver the keys to the captain. Strange sounds were heard that night and when the man returned to the guard room he was white and terrified, unable to stop shaking. He never spoke of that he had seen that night, but three days later, he was dead. This was the last recorded sighting of the Moddey Dhoo; it was decided to seal up the haunted passage and use a different route, and the hound was seen no more.

Waldron’s Moddey Dhoo made a comeback in a different form when Sir Walter Scott wrote Peveril of the Peak, an installment of his Waverly novels, in 1823 and introduced the “Manthe Dog” which was a demon in the shape of a large, shaggy black mastiff. Scott’s fiendish dog was somewhat larger than the Manx spaniel, but he credited Waldron as the source of his creation in his author’s notes.

Local legend claims that the Moddey Dhoo has been sighted beyond the walls of Peel Castle over the years. William Walter Gill has written some of the accounts which have placed the ghostly dog near Ballamodda, Ballagilbert Glen and possibly Hango Hill. He also reports sightings in the 1920s and 1930s at Milntown corner, near Ramsey. 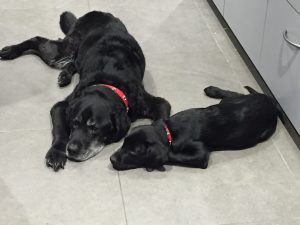 Moving to the island back in 2002, I had never heard of the Moddey Dhoo until my first visit to Peel Castle. When we acquired Toby, our huge black labrador, we were frequently greeted by strangers when we were walking him, comparing him to Peel’s most famous canine. With Toby gone now, we have Oscar, a younger version, to keep the old legend fresh in our minds.

I always really liked the original story of the ghostly dog coming to doze by the garrison fire until morning. He must have been irritated when the antics of a drunken guard caused his route to be blocked up. In my admittedly over-active imagination, he went elsewhere and found a warm spot in the cottage of an old man who thought he was a local stray and welcomed the company. That guard probably died of a pickled liver anyway.

For anybody who wants a historic ghost story, I wrote The Quartermaster to celebrate Hop tu Naa this year and An Exploring Officer last year, both set during the Peninsular War. They’re both free, so read, enjoy and share if you wish.

Happy Hop tu Naa (or Halloween) to everybody, from all of us at Writing with Labradors. Here on the Isle of Man, they say that the veil between the worlds is much thinner on this night, and spirits of the dead can be seen. Like the garrison of Peel Castle all those years ago, I’d be very happy if the spirit of one particular black dog wandered in and curled up by the fire just like he used to… 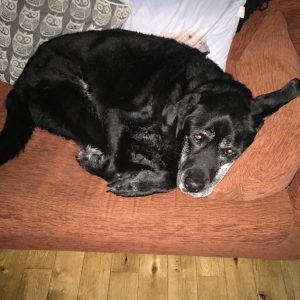