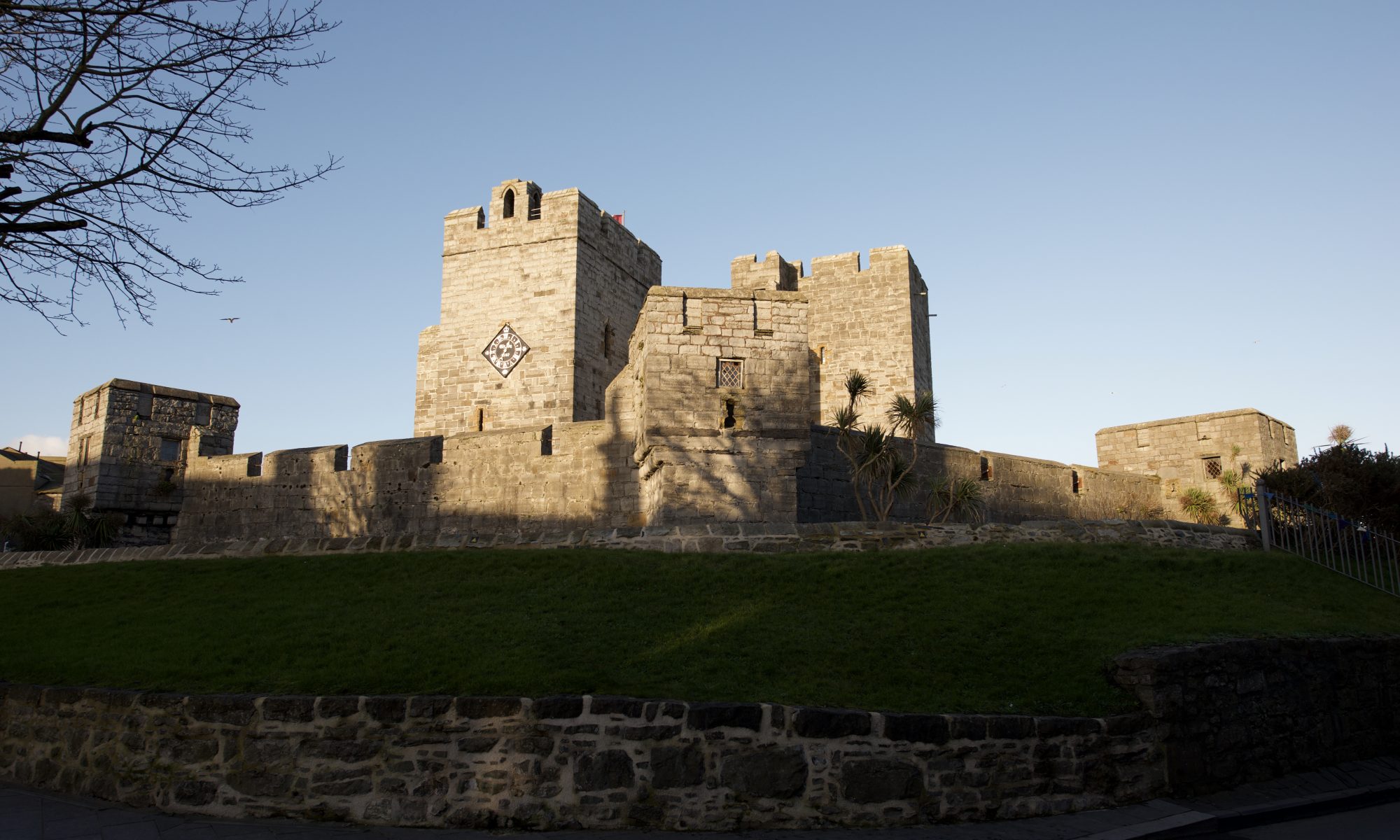 What better way to spend a beautiful evening than to take a tour of haunted Castletown? That’s how I spent yesterday evening, courtesy of Isle of Man Ghost Tours, and I have to say I thoroughly enjoyed it.

I’ve done a few ghost walks in the UK over the years. The York one was particularly good and I also enjoyed Chester and Shrewsbury. A few years ago a friend invited me to join her work evening out which turned out to be a ghost walk around Douglas followed by a meal and drinks. It was winter, a freezing cold evening and I think the early darkness contributed to the atmosphere although by the end I suspect we were all too cold to enjoy the final few stories.

It was a different experience yesterday and we toured Castletown in the evening sun. It was a very small group; the walks have only just started up again for the summer season and it was Tynwald Day, a bank holiday on the Isle of Man, so I suspect a lot of local people were at St John’s or else at home enjoying the weather. My own family chickened out so I went alone.

The appeal of a ghost tour for me is only partly about the supernatural. I’m not really a believer in ghosts but I have always loved a good ghost story. As a child I was very susceptible to nightmares and I can remember my mother banning me from taking books of ghost stories from the library as she was fed up with being woken up in the night by an eight year old hearing imaginary bumps in the night. As an adult I still enjoy them and was a huge fan of the novels of the late, great Barbara Mertz who wrote some fantastic ghost stories under the pen name of Barbara Michaels.

But in addition to the supernatural element, I just like a good story, and that is what I got from the tour last night. The guide interspersed tales of hauntings and mysterious figures with comic anecdotes about such local characters as Gerald Gardner, the founder of the Wicca movement, who lived in Castletown and apparently had to be warned by the local constabulary for holding meetings in his home which included a collection of naked women. Gardner was obliged to get curtains put up to avoid offending the neighbours and to get rid of the horde of peeping Toms who used to hang around in the street outside.

The tour guide had clearly done his research, both in the archives and by talking to local people and visitors with stories to tell. He was a good speaker, very engaging, and the two hours passed very quickly. Some of the stories 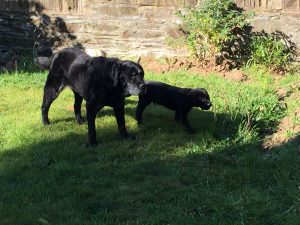 were genuinely funny; I particularly liked the one he apparently found in an old book telling of the ghost of a black headless dog in Castletown which can only be seen by another dog. A talking dog, presumably. I must take my boys down there and they can tell me if they see anything… 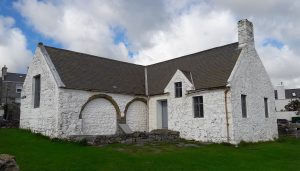 Other stories genuinely had a spooky feel about them. The ghostly woman in black seen around Castle Rushen is a very traditional ghost story but there’s a reason it’s a classic and the mysterious light coming on at night in one of the rooms of Compton House was also an odd one.  I also enjoyed the haunting of the Old Grammar School; ghostly children’s voices singing in an empty building is a definite chiller.

I was curious to find out if there were any ghosts from the Napoleonic War period but there were none mentioned on this tour. A lot of the Manx chapters of An Unwilling Alliance are set in and around Castletown and it would be fun to come up with a story from that period. I’m currently looking out for an idea for a nice Manx ghost story for Hop tu Naa this year, so watch this space.

All in all, I’d really recommend this as a way to spend an evening. I’d like to go back to do some of the other tours as well; I’ve a feeling there are many more spooky tales to come.

It was growing dark as I walked back to the car past the gates of Castle Rushen and the old House of Keys. I honestly don’t believe in ghosts, but passing Compton House I couldn’t stop myself from looking up at the windows. No light came on. I was laughing at myself as I got to the car because I’m aware that I didn’t look back a second time. Just in case… 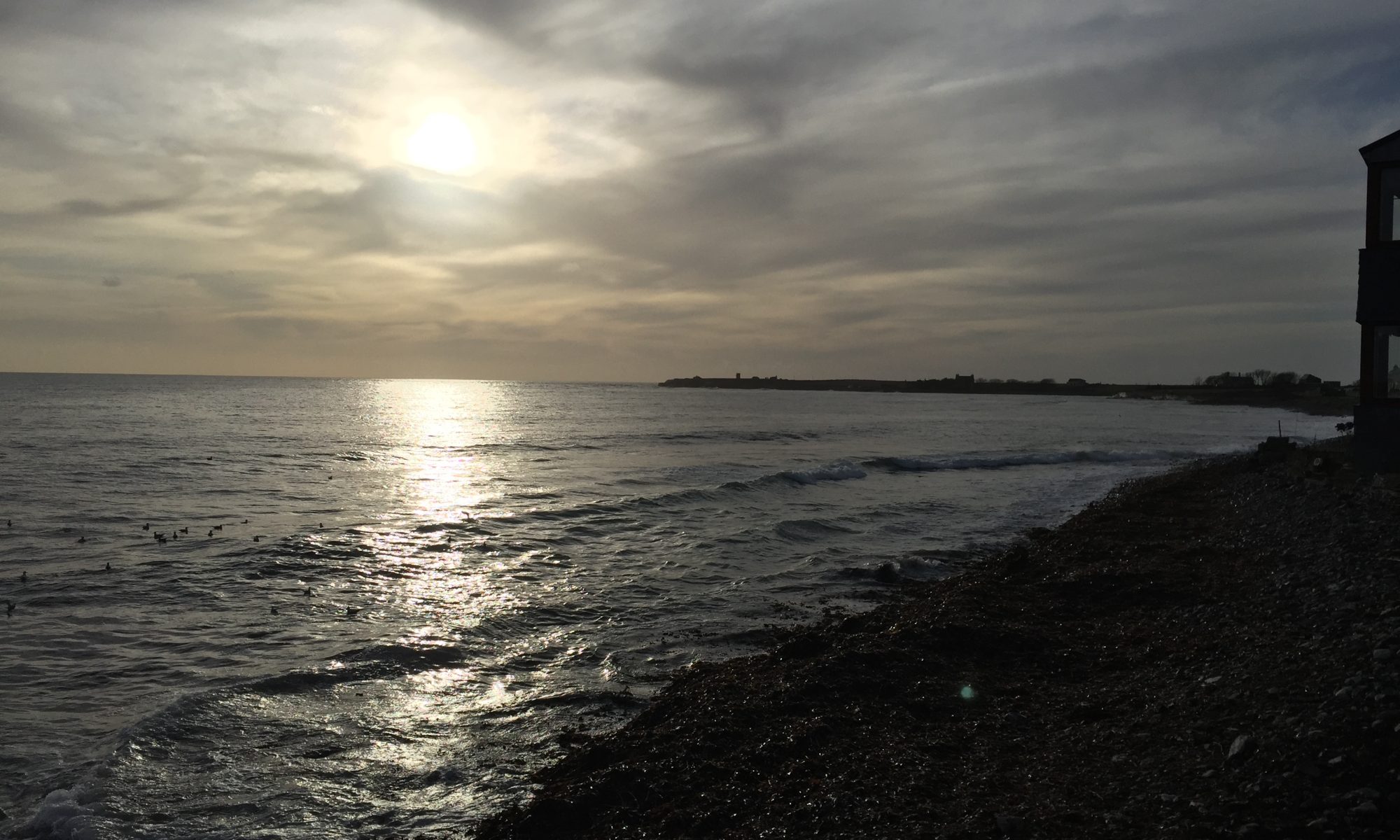 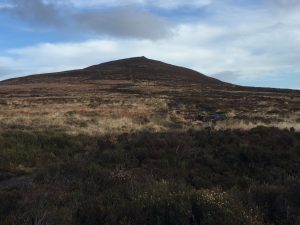 South Barrule, Isle of Man, is the setting for one of the early scenes in An Unwilling Alliance which is due out in April 2018. It is one of the most prominent of the southern hills and its name derives from Wardfell, the hill of the ward or watch where men were stationed to watch for invading ships.  In Manx folklore it is said to be the stronghold of the sea-god, Manannan Beg Mac y Lir.  It is the site of an ancient hill-fort which was excavated in the 1960s. 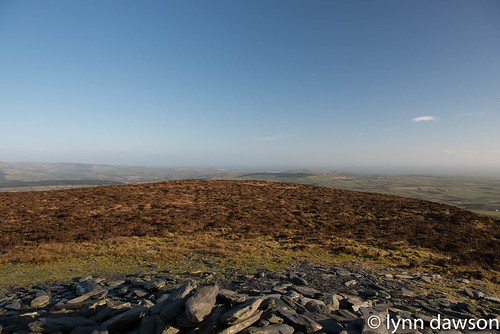 In the following excerpt, Captain Hugh Kelly has persuaded Miss Roseen Crellin to climb to the top of the hill with him.  The couple have only recently met, and Roseen’s father is keen to make a match between them.  Hugh is looking for a wife and is definitely interested but Roseen is resisting the idea of being pushed into any marriage with a man she hardly knows, especially since she is pining for a young Englishman who has recently left the island.  At the same time, she actually quite likes Hugh, or would do if he would stop trying to flirt with her…

There was a well marked path and although the going was steep, it was not a particularly difficult climb. Hugh kept a cautious eye on his companion but after ten minutes he relaxed. Miss Roseen Crellin, for all her dainty appearance, was as strong as a young pony and strode up the slope without struggling at all, hampered a little by her skirts. The hem was quickly muddied in some of the boggier areas but it did not seem to bother her. Hugh offered a hand on some of the rockier sections of the path and she accepted it although he suspected she did not really need it.

The breeze picked up as they climbed higher. Around them the slopes were covered with heather, the plants massing together to form a thick, bushy carpet, almost a foot tall in places, tough and strong and made to withstand the dry winds across the hills. Already it was beginning to bloom in swathes of mauve and purple and bright pink. It was springy under their feet and there was a familiarity to the feeling which made Hugh smile, remembering hours of scrambling over these hills with Isaac and other friends of his childhood.
A scrabbling made him turn and his companion stopped and put her hand on his arm to still him. They watched as half a dozen rabbits, disturbed by the unexpected human presence, scrambled inelegantly for their burrows, their short tails vanishing below ground in a flurry of panic. Above, silhouetted against blue sky and scudding white clouds, birds soared and dipped. The air was fresh and clean and Hugh felt an unexpected rush of sheer happiness at being here on these hills, breathing this air and hearing the sounds of home around him.
“Do you miss it – when you’re at sea?”
Hugh turned with the startled sense that she had read his mind. “Yes. Oh God, yes. All the time. I love being at sea – been there most of my adult life. A ship is home to me in ways you can’t imagine. But still I miss this. The smell of earth instead of salt and the solid ground beneath my feet. The sense of something real that I can touch and own. A ship can’t give you that. Even the wind smells different here. This is home. This is Mann. Have you travelled off island much?”
“Twice only. My father’s youngest sister married a Manchester cotton spinner and lives just outside the town. I didn’t like it much.”
Hugh smiled at her expression. “Not even the shops and the theatres?”
“I enjoyed the opera,” Roseen said, after a moment’s consideration. “Shops are shops. Once you have what you need, I’d rather go home.”
Hugh laughed aloud. “You’re an unusual girl, Miss Crellin. Here, give me your hand. Almost there.”
At the top they stood for a moment, catching their breath, drinking in the beauty of the landscape which stretched out before them. The wind buffeted them, cooler up here than the gentle breeze at the foot of the hill, and Hugh studied his companion. The exercise had brought colour to her face and the wind had tugged her hair loose from it’s confining pins so that part of it blew free. She did not seem conscious of it at all. Her eyes were on the silver surface of the sea, over beyond Derbyhaven. The odd T shape of the Langness Peninsula jutted out into the sea and a ship bobbed at anchor in the bay. Further out they could see, once again, a flotilla of small boats; the fishing fleet busy about its work.
“It’s so beautiful,” Roseen breathed. “Thank you for bringing me up here, Captain. I’d no idea you could see so far.”
“We’ve picked the right day, it’s very clear. I’ve been up here and barely been able to see to the bottom of the hill for the mist,” Hugh said.
“Have you? Why make the climb?”
“Playing truant from school. Nobody was going to come searching for me up here, and if you duck down behind the old rampart over there it’s very sheltered, you can hardly feel the wind.”
“I’m glad you said that, I wasn’t looking forward to picnicking in a gale.”
Hugh grinned. She was shading her eyes against the bright sunlight, looking around her. Over to the north-west a huddle of white houses and red roofs marked the location of Peel, although it was not possible to make out the distinctive shape of the castle from here. On the opposite side of the island was the larger town of Douglas, growing fast with it’s new shops and some elegant houses built by men making themselves wealthy in trade. To the south-east lay Castletown, just beyond the peninsula, and here he could see the soft grey stone of the castle very clearly.