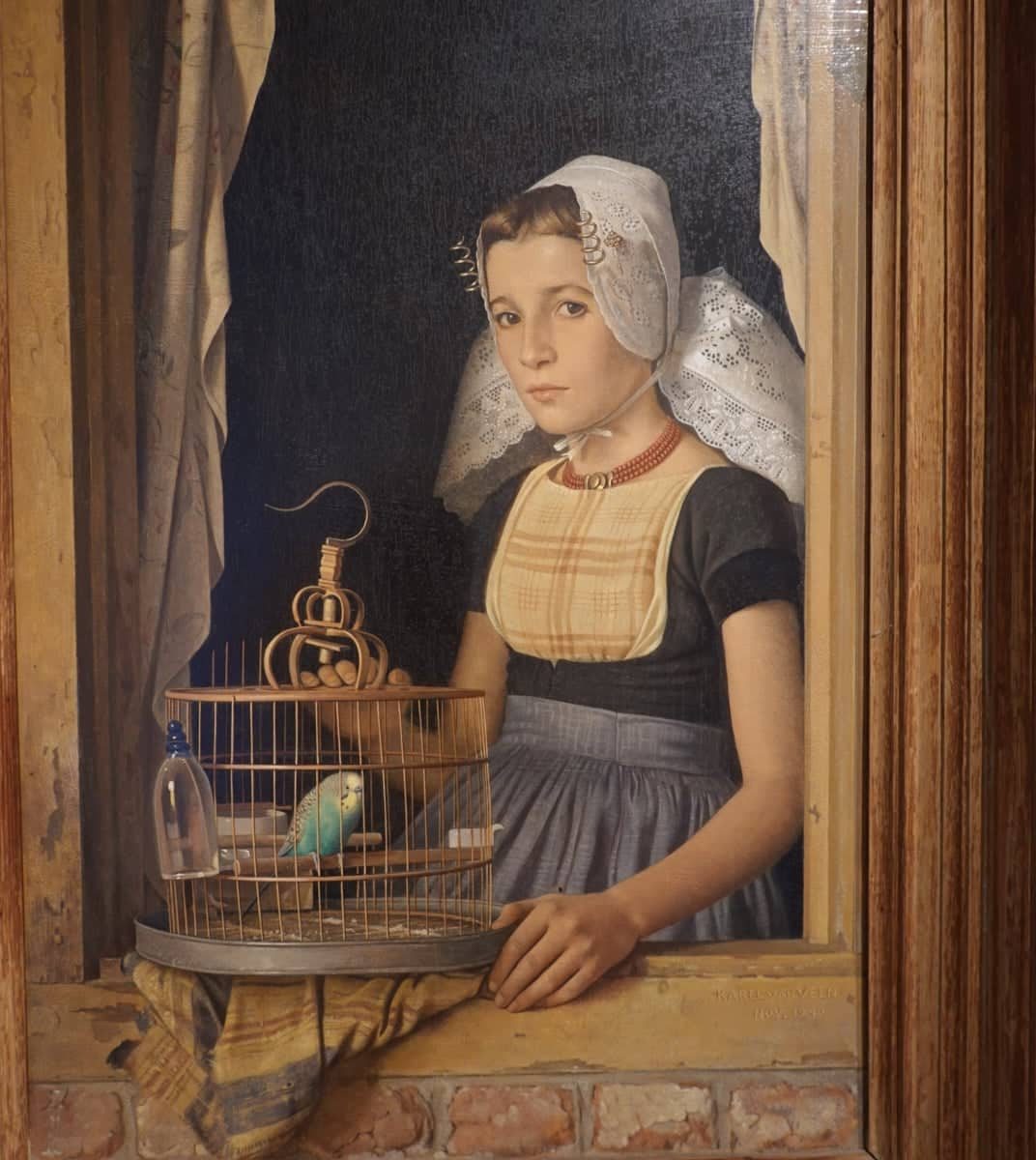 Our Walcheren Expedition Day 3 was dedicated to museums. This turned out to be a good thing because it rained all morning.

I was woken at around 2am by a spectacular thunderstorm. I’m not scared of storms, but I do find it difficult to sleep through them, so while the man I married snoozed on happily, I sat by the long windows in the living room and watched the sky light up, thinking about the reported thunderstorms in the days leading up to the bombardment of Vlissingen in 1809.

The storm rumbled on until about nine, but the rain continued. We hovered, unable to decide, and then got bored with waiting and set off for Middelburg Abbey. It’s about ten minutes walk and the rain had stopped by the time we got there. Nothing was going to stop our Walcheren Expedition day 3. 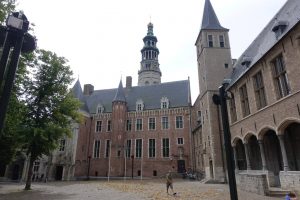 Middelburg Abbey originated in the twelfth century. Monks from Antwerp established a large religious foundation with two churches and extensive lands on Walcheren and in other parts of Zeeland. Many of the surviving buildings from the monastic period  are Medieval Gothic, and date from the late sixteenth century.

Monastic life came to an end in 1574 when the Spanish surrendered to the Protestant Dutch separatists at the end of the two year Siege of Middelburg. William of Orange had given guarantees that the clergy would be left alone, but both the abbey and Roman Catholicism in Middelburg were nevertheless forcibly terminated.

The abbey was taken over for use in the secular administration of the province. Initially it was used as the seat of the district assembly and for other administrative functions including the admiralty, a mint, and a court chamber. Following reforms during the Napoleonic occupation, in 1812 the former abbey complex became known as the Province Building.

The abbey church was badly damaged in May 1940 by German aerial bombers targeting Middelburg in order to persuade the Dutch army not to hold out against German invasion and rebuilding was not completed till 1965. Other abbey buildings continued to accommodate government activities till the end of the twentieth century, such as the land registry and state archive.  Part of the complex now houses the Zeeuws Museum and the Roosevelt Study Centre.

The two Protestant churches are still referred to as Abbey Churches, reflecting their monastic origins. The Choir church or Koorkerk was built around 1300 and comprises a tall chancel of seven arches in length, with a five sided apse to the east of the choir stalls  with elaborate roof vaulting. On the south side is the church tower known as Lange Jan. 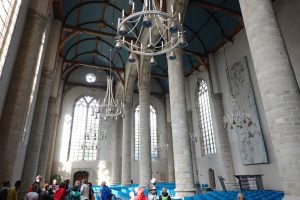 The New church  features a double nave and dates from the rebuilding that followed the fire of 1558. It replaced an earlier church built around 1300 which also featured a twin nave. The eastern wall of the New church is also the western wall of the Choir church, and the two interiors were originally connected through an arch, but this was subsequently blocked up. After 1833 the New church became the only parish church for the central walled area of Middelburg.

Both churches are beautiful, although in the middle of the tourist season it was hard to get the sense of peace that I love about old churches. I found this in the old Abbey cloisters, cool and dim, with sunlight peeping through and a gloriously tangled herb garden in the centre; my favourite part of the Abbey. 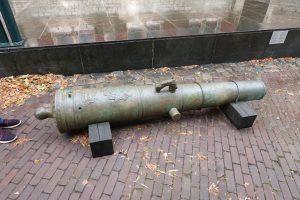 There is a big, open square in the middle of the Abbey buildings, with trees and seats and a couple of cannon which look rather as though they had been carelessly abandoned by some negligent commissary officer. There is also the entrance to the museum and cafe. 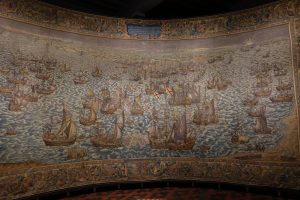 This part of the building has been thoroughly modernised inside, giving little sense of the original abbey. The museum has exhibitions over a number of floors. It is very well designed and put together with very modern themes, but I will be honest and admit that I was a little disappointed. While I wasn’t expecting to find anything about the campaign of 1809 which was not especially significant in Dutch history, apart from the people who died in Vlissingen and Veere, I was very much hoping for some information about the history of Middelburg and Walcheren and that was very much lacking. The one exhibition which dealt with history, was an amazing selection of tapestries telling the story of the rebellion against Spain. I loved that section. Much of the rest of the museum was beautifully put together but gave very little actual information about the town or its history. Given that there is no other museum in Middelburg to do that job, I thought it a shame, although I did pick up some useful information about historic costume. 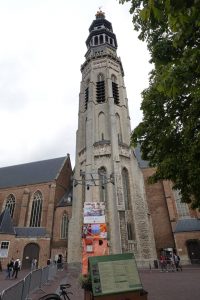 We climbed Lange Jan to see the fabulous views over the town, following in the footsteps of my fictional Lieutenant Durrell who found it a quiet haven away from the chaos of the campaign in 1809. After coffee and cake outside a local cafe, dodging another rain shower, we went back to Veere to the two museums there. The Veere Museums consist of the City Hall and the Scottish Houses on the quay, both fabulous historic buildings.

There is a unique collection of 16th century statues which once adorned the façade of the City Hall and are on display in the ‘Statue hall’. The ‘Scottish attic’ tells the story of the long lasting trade relationship between Scotland and the city of Veere. Veere was once the centre of the profitable wool trade between Scotland and the Low Countries; the town won staple-rights on Scottish wool in 1541, meaning that the goods had to be made available for purchase there for a set time before being allowed to go on sale elsewhere. This important and profitable trade right encouraged Scottish merchants to establish themselves in Veere permanently and for a period of time, the small Scottish community was ruled by Scottish law and their own leader within the Dutch town. 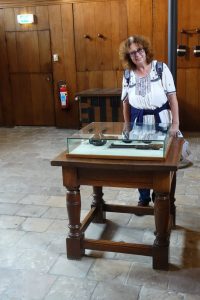 The museums in Veere were far more interesting in terms of history, although I have to say that there was still more art than history in both of them. I really enjoy art, and I loved the story of the English family who set up an artists’ community in Veere before the second world war. I still felt a slight sense of frustration, however. These towns have so much history and I came away knowing very little about the people, the development of the town, their economy and agriculture and what shaped them. Perhaps there’s a museum somewhere else in this area that I’ve not found which offers that. 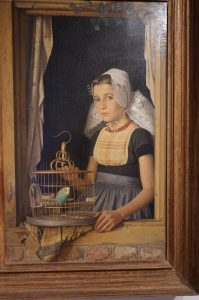 Having said that, I had a fabulous day. The museums were great at what they did, even if it wasn’t what I wanted, and I thoroughly enjoyed myself. I also found, in a rather more modern painting of a woman in traditional Dutch costume, my perfect Katja de Groot. Honestly, I couldn’t stop staring at her. Isn’t she beautiful?

Tomorrow is Vlissingen, and the nautical museum. I really like this part of the world; it’s very relaxed and we’re having a great week. Even if my husband dreams of hills he could cycle up… 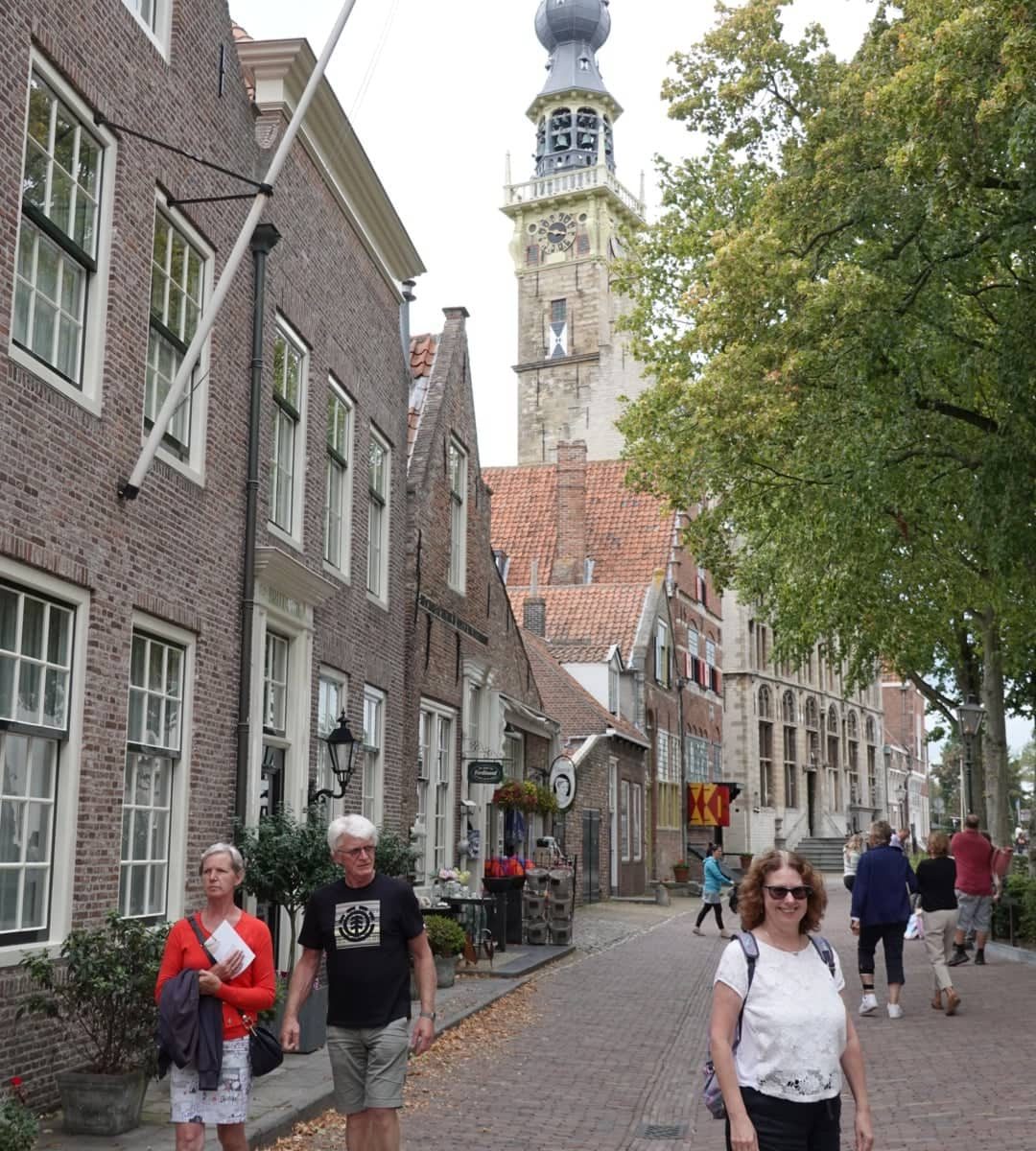 Our Walcheren Expedition, day 1 was spent exploring the area by car. It’s always good to do that if possible, to get a sense of the place before planning the week. Given that the real purpose of this trip is to give me a sense of how Walcheren might have been in 1809 when This Blighted Expedition is set, there’s something very exciting for me in walking down streets and looking at views which my characters would have known. 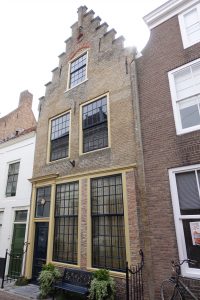 Given that, we were very fortunate to find an apartment, through Airbnb, on Korendijk, which is directly on the canal and is where my Dutch heroine, Katja de Groot, was living with her three children when the British invaded in 1809. Much to my joy, the house turned out to have been built in 1722. Most of the buildings along the street are from the seventeenth and eighteenth century and all fit well with the tall houses that the merchants of Walcheren built to house their businesses and their families.

Our landlady, apparently recognising a history nut at forty paces, explained that this house was built by a wheat merchant, who also owned a mill and a bakery nearby. The beams have a very battered look, understandable because much to my joy, they were recycled from old ships from the local ports. In one part of the building, it’s possible to recognise part of the ship’s mast.

Chatham’s army landed at Bree Sands, to the north, and that is where we started our drive around Walcheren. The challenge of getting the location right in this particular book is that the landscape has changed dramatically. In 1809 Walcheren was an island, as were North and South Beveland. Land reclamation means that it is not possible, as it often is in Portugal and Spain, to look over the landscape and know that you are seeing pretty much the same land as your characters. 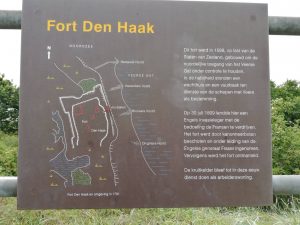 All the same, the wide beaches and strong winds definitely give a good sense of what Chatham’s men faced when they landed on Walcheren. We even managed to find the location of Fort Den Haak, where Lord Chatham set up headquarters on that first night, although whatever remains of the fort itself is currently inaccessible to the public. Interestingly, it is further inland than it would have been in 1809. 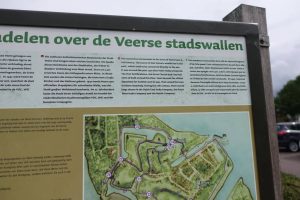 Following General Fraser’s trail, we drove to Veere, which is a beautiful little town which refused to surrender immediately to Lord Chatham’s army and was battered from both land and sea to persuade it to do so. There is a walk around the fortifications of Veere which we did, and it gives a good sense of the town defences, although most of what exists today was built from 1810 onwards when the French returned, including a fine selection of artillery from 1810 and 1811. We’ll be back to do the museums another day.

Later in the day we took a stroll around Middelburg to get our bearings and were impressed with Middelburg Abbey, where Lord Chatham set up his headquarters. Having seen Wellington’s various headquarters in the Peninsula over the past two years, it was clear that Lord Chatham was somewhat more set on luxury than Wellington, although now that I think about it, the Royal Palace in Madrid probably trumps Middelburg. Once again, we’ll be back to do the museums.

Already I’ve picked up an enormous amount of information for the book, but more importantly, I have a sense of the area and the countryside. One of the things that contemporary accounts frequently mention is that it is flat. They were not wrong about that, so I have decided that tomorrow I shall venture around the coastline on a slightly different mode of transport, and one that I seldom use… 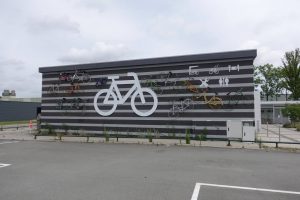