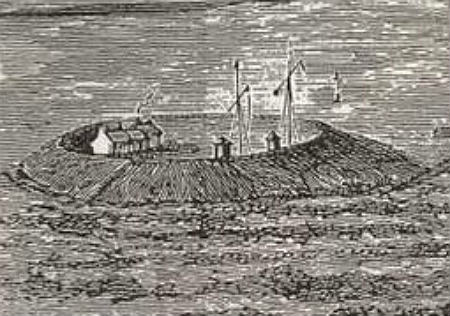 To begin with, I should explain that this is not a serious post about the history of the Grand Redoubt, Dungeness, although I have included a little information just to put the hilarity in context.

The following correspondence was discovered in the archives some years ago by my good friend Dr Jacqueline Reiter.  Surprisingly, she wasn’t trying to research anything about the latrines at the Grand Redoubt, but she thought this was a hilarious little window into real life in the coastal defences in 1809 and shared them with me. I laughed a lot. Despite the old-fashioned language, my first thought was that nothing changes. Exchanges like this still happen when red tape goes mad every day, all over the world.

Then, inevitably given the date, my thoughts wandered to my fictional officer of light infantry and I mused on the fact that this is just the kind of bureaucratic nonsense which would drive Paul van Daan up the wall. From there, I found myself wondering exactly where Paul might have been while this exchange took place. At that point I realised he would probably have been on the south coast waiting to embark for Portugal with Sir Arthur Wellesley.

Once I’d worked that out, I couldn’t resist composing a typical Van Daan response to this situation. It’s very silly, but  I’ve recently rediscovered it and thought I’d share it for the benefit of those of you who enjoy a good rant from the commander of the 110th. Or for anybody who still sniggers at jokes about toilets.

Romney Marsh has always been vulnerable to attack from across the Channel and with the threat of invasion from Napoleon, Britain began planning a number of defensive measures across Romney Marsh. These included the building of the Royal Military Canal, Martello Towers and a number of gun batteries and forts on the coast at Dungeness and Lydd-on-Sea. The Martello Towers covered the  coast as far as St Mary’s Bay which left the Dungeness peninsular vulnerable to attack. Four batteries were built and these were were supported by a redoubt at Dungeness Point itself.

For clarity, the original letters found in the archive are in italics. The rest, I made up.

I do hereby certify that the whole of the Privys at this Redoubt wants emptying, and do therefore require you to cause the same to be done with as little delay as possible.

The Privies to be emptied and the Glass replaced…Mr Jones (Barrack Master) is desired in future to put proper headings and certificates to his Estimates as Emptying Privies cannot be Repairs to Buildings.

By order of the Board, Fred. Mackenzie Esq.

Heretofore Emptying of Privies was always included with Repairs to Buildings

Emptying Privies is not a business that requires any uncommon hurry, it is the usual Monthly Business…

Thank you for copying your letter on the matter of the barracks privies. It thoroughly brightened a wet Tuesday in Braga, I must say, I wasn’t expecting it.

It isn’t clear to me exactly what you’re expecting me to do about your privies from Portugal, but since you’ve been kind enough to invite my comments, let me be very precise.

As you are aware, Sir Arthur Wellesley sent me on a tour of inspection of several of the fortifications along the south coast while waiting to embark my battalion to Portugal. I have no idea why he did so, other than to give me something to do, since as far as I’m aware he has no responsibility for these defences and no earthly right to interfere with the running of them. This has never stopped him before and will not stop him in the future.

The inspection was fairly memorable for a number of reasons, but the one that really stands out for me was the stench arising from the privies of the Grand Redoubt at Dungeness. I could smell it as I rode in and I rather imagine that the townspeople of Rye were able to smell it on a daily basis as well; it carried for miles.

What your usual arrangements for getting the privies emptied might be, I neither know nor care. It appears that applying to the Board under the wrong heading could have something to do with the delay according to Mr Frederick Mackenzie’s correspondence. If this was indeed the case, you may reassure yourself that it is unlikely to occur again since I have explained in considerable detail to Mr Mackenzie that he may enter that Estimate under any bloody heading he likes, including Shit Shovelling, for all I care, as long as it gets done in a regular and timely manner. I am fairly sure Mr Mackenzie now understands that if I come back to England to find that those poor bastards manning that redoubt are still having to live with that smell because of his petty, bureaucratic, small-minded need to get the paperwork right, he is going to end up with a wagonload of militia turds on his doorstep under the heading of Just Desserts the following morning.

While Mr Mackenzie is a problem in himself, the fact remains that Captain Kynaston told you those privies were a disgrace on 18th April and it took you until 13th May to get them emptied. That is approximately 25 days too long. You’ve a tool shed and some spades and if you can’t get the contractor out in a timely manner, it is your duty as Barrack-Master to get the job done however you can. You have a collection of perfectly able-bodied men there, and presumably if they’re capable of filling the privies, they’re capable of emptying them as well. Start with the ones who failed my kit and uniform inspection, I gave you a list of them, and there were enough of them to keep those privies fit to dine out of, they were a disgrace.

I sincerely hope you have no further problems with this matter, but in case you do, be assured that I’ve written not only to your commanding officer, but to Major-General Whetham reporting on the conditions I found there, so I rather imagine you’ll be subjected to more regular inspections in the future. I do hope so for the health and well-being of the men you command.

Finally, I refer to your comment suggesting that Emptying Privies is not a business that requires any uncommon hurry. That’s an interesting perspective, and not one I share. Every single aspect of your duty as Barrack-Master requires uncommon hurry if it affects the men who will be expected to defend their country against a French invasion. I’ve no idea when I’ll be back in England, but when I am, I intend to travel via Dungeness and if I find those privies in the condition they were when I visited last month, you are going to end up head first in the worst of them with your boots waving in the air, and we’ll see how long any of your men take to haul you out.

Don’t bother me with this nonsense again, there’s a war on.