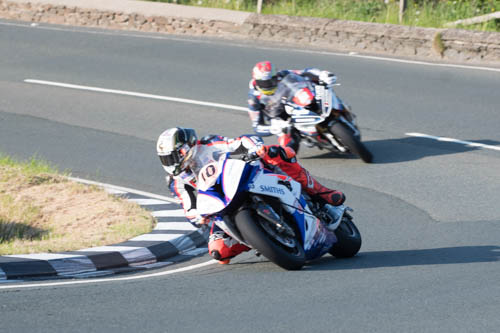 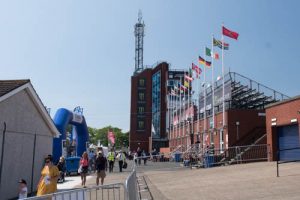 vents of this week reminded me of this blog post I wrote about the TT this time last year. I wanted to share it, as it gives a bit of a flavour of what it’s like to be living in the middle of this madness.

Yesterday, in practice, we lost Dan Kneen, a local rider from Onchan who looked very much on the verge of a breakthrough this year in terms of podium places. Steve Mercer, another favourite, has been taken to Liverpool in critical condition. I feel unbelievably sad about it, but it doesn’t stop me going out to watch the racing, which is difficult for many people to understand. I wondered about sharing this again, but I decided I would, because I still feel the same way about this event. It is part of the island, part of my home and over the past sixteen years has become part of who I am.

Dan Kneen’s father issued a statement after his son’s death, and this quote says it all for a lot of the riders and their families.

“Dan would want us to be strong and for the Tyco team to crack on, they have my full backing. Let’s think of the happy times with Dan and smile when you think of him. Thanks to the marshals and medics and everyone involved. Thinking of Steve Mercer as well. Best wishes for all the other TT competitors. The TT show will go on.”

I’m really hoping the rest of TT 2018 is a safe one. In the meantime, this is my post from last year.

With the excitement of launching my books onto an unsuspecting world, having pneumonia and surviving GCSEs and AS levels with two teenagers, the arrival of the Isle of Man TT 2017 has rather crept up on me this year.  It wasn’t until I spoke to somebody in a government office yesterday and heard the familiar cautious words “well it might be ready, but you know it’s TT” that I remembered that for the next two weeks normal life is going to stop.  Welcome to the Isle of Man TT 2017 – a spectacle like no other but a bit of a distraction when you’re trying to live a normal life.

The Isle of Man TT 2017 has nothing to do with writing historical novels but living where we do it will certainly impact on my ability to concentrate.  Sitting at my desk looking out of the window I can actually see the TT course through the trees and when practice and racing are on it gets noisy.  When we first moved into this house Toby the Labrador took exception to the bikes and kicked off every time they came past but fortunately he’s got very deaf now.  This is difficult when calling him for any reason, but it does make race days easier.

In addition to the actual racing, we’re very close to the historic grandstand which means that every single biker who comes over for TT will, at some point, be clogging up the traffic at the end of our road.  During road closures we can’t get out at all so we park one of the cars around a back road since there is a pathway which we can walk through.

Traffic during the TT festival is hideous, and gives us locals something new to moan about although to a woman who grew up in London, I was baffled when I first arrived here.  I’ve absorbed a bit of Manxness in the past fifteen years and now find the heavier traffic just as horrendous as everybody else since we’re not used to it.

Despite all this, I actually like the TT.  We used to entertain every year with a houseful of enthusiastic bike fans and every night was party night.  These days we’re very sedate.  House guests don’t work with two exam stressed teenagers, and because the exam timetable is set in the UK where this half term is different to ours, the kids are actually doing exams during TT week which would be tough with visitors.  It’s tough anyway, their school is on the course so they are sometimes sitting there trying to do simultaneous equations with the deafening sounds of bikes screaming past.

I still like to go out to watch the racing.  There’s a social feel to watching the TT.  Given that Richard is a brilliant photographer and particularly good at motor sport shots, we like to go to a variety of places, some easier to get to than others.  Personally I love the popular spots like Braddan Bridge and Union Mills church where you get get a cup of tea and there are proper toilets.  Must be a sign of age.  Richard is far more intrepid and I’ve climbed fences, scrambled up hills and sat on a mountain in freezing fog waiting for it to lift so that the racing can start.  Last year I ended up half crippled after pulling a muscle climbing over a fence, a reminder that I’m fifty four not twenty four and I really need to think about what I’m doing a bit more.

We’ve met some great people watching the racing, both local and from the rest of the world.  Everybody chats, everybody is friendly and it’s the best atmosphere ever.

Every now and then, I come up against that fact and it shocks me.  It doesn’t shock me because it happens.  It shocks me that after fifteen years of doing this, I’m not shocked by it.  I’m saddened.  On one or two occasions it’s been someone I’ve met personally.  It’s often people I know a lot about.  People come to the TT year after year.  It’s like an addiction for the riders, passed down through the generations, and a death in the family doesn’t stop them.  The Dunlops have lost two family members to road racing, but Michael and William Dunlop will be out there again next week.  They risk their lives for a passion and we watch them do it.

Every year, magazines and news articles talk about the death toll and speculate on whether something so dangerous should be allowed to continue. I can understand why they say it.  For people with no love of the sport, and there are many even on the island, it must seem completely incomprehensible, in these days of enforced safety in so many areas, that every year a group of people go out and race around country roads, within centimetres of stone walls and lamp posts at speeds well in excess of a hundred miles per hour.  Even being a spectator in these conditions is potentially dangerous.

For all that, I love the TT.  The men, and a few women, who come here to race aren’t usually the superstars of sport.  They’re ordinary people, mostly amateurs, who work all year for the chance to compete on these roads.  They know the risks and they know the possible consequences, but like a mountaineer always looking for a higher peak and a bigger challenge, they keep pushing themselves to ride faster, to break lap records and reach that next elusive goal.  It’s an amazing spectacle and I wouldn’t change it.

Despite exams and recovering from pneumonia, I’ll be out there watching again this year.  We’re missing John McGuinness who recently came off at the North-West 200 and is injured.  We should have Guy Martin back this year, definitely one of the characters of the sport.  And there will be the newcomers, learning the course with their eyes on future glory.

I hope it’s a good year, which means that the weather is good, the races on time and everybody stays safe.  There’s nothing like the TT and no place like the Isle of Man and for anybody who likes motorbikes you should come here and see it at least once.

For those of you interested in TT photography, have a look at Richard’s flickr site, there are some amazing shots.