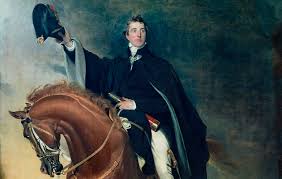 Christmas with Wellington is an excerpt from the next book, An Unmerciful Incursion, which is book six in the Peninsular War Saga. Lord Wellington was actually away from headquarters for the Christmas of 1812, as he travelled to Cadiz and then Lisbon in appalling weather for discussions with the Spanish and Portuguese governments. In the book, Paul van Daan has organised an early celebration and a surprise gift.

Paul grinned and surveyed the room. “German Christmas customs, apparently, sir. They make a good deal more of the season than we do. We always used to decorate with greenery at home, mind, I can remember as a boy helping the farmhands cut down branches and boughs to bring in on Christmas Eve. And we used to have a Yule Log, which I believe is a very ancient custom. After my mother and my sister died, my father refused to do it any more. I missed it.”

Wellington shot him a sideways glance. “How old were you?”

“I was ten. As to this, General Alten is joining us and I wanted to do this for him. He misses home.”

Wellington gave a snort. It was his first of the day, and it had a pleased sound to it, which boded well for the meal. “You are appallingly sentimental, General, it quite shocks me.”

“That’s rich coming from the man who was making sounds like a turtle dove to my five week old daughter five minutes ago. Don’t deny it either, I heard you.”

Wellington sipped the wine. “She is my god-daughter,” he said huffily.

“She might be, but I’m not sure that has anything to do with that soppy expression you wear every time you see her,” Paul said with a grin. “Don’t look so defensive, sir. You must miss your boys. Why don’t you get your wife to bring them out for a while, now that we’re settled in winter quarters?”

“It would distract me,” Wellington said. “There is so much to do, to prepare for next year. I have no time.”

Paul said nothing. After a short silence, Wellington said abruptly:

“My wife is not like your wife, General. She has excellent intentions, but I know very well that she would not understand what I need to do and how little time I have to spare. We would quarrel. And it would distract me. So I am afraid you must put up with me doting upon your daughter instead.”

“Not a problem, sir. You know how sentimental I am, after all.” Paul raised his glass. “To Christmas.”

“It is not yet Christmas, General, as you well know, and I have no time to celebrate anyway. I am setting out for Cadiz tomorrow. Really, I should be back at my desk now, there are some final orders…”

“Stop it,” Paul said. He saw the blue eyes widen in surprise, he was seldom so abrupt with his chief, but he was suddenly exasperated. “I know you need to go to Cadiz, sir, and I know why. I think you’re bloody mad to travel in this weather, you’ll be forever on the road and my sympathy lies with every single one of the men travelling with you, you will be horrible. And I am grateful that you didn’t insist on me going with you. But my wife has organised this very early Christmas dinner so that you at least have one day to eat a decent meal, have a drink with some of your officers and mend some bridges after that appalling memorandum you sent out last month. She’s put a lot of work into this, and I am not having you grumbling over the roast mutton because there is one more rude letter to some hapless Portuguese administrator that you forgot to write. Are we clear?”

There was a long and pointed silence and Paul tried not to look as though he was holding his breath. Eventually, Lord Wellington took a long drink of wine.

“There is still time for me to insist that you come with me,” he said, and Paul laughed.

“Having me with you, while you insert one of Congreve’s rockets up the arse of the Spanish government sounds like a really bad idea, sir, they do not need two of us.”

Wellington smiled with real amusement. “That is why I am leaving you behind to do the same to every senior officer in my army who fails to follow my instructions on the drills and training to be conducted during winter quarters this year,” he said. “By the time we are ready to march, which I hope will be no later than April, I want every man of my army to know what he is doing. That is your job, General.”

“And a lovely Christmas gift it was too, sir. I’m going to have to take a bodyguard out with me, they’re going to hate me. Now stop grumbling, and come with me.”

Paul led the way outside and took the path towards the stables. Wellington was frowning. “Where are we going?”

“I’ve something to show you. In here.”

One of the stalls at the end had been roughly blocked off with wooden slats. Paul stopped in front of it, lifted the makeshift barrier out of the way and bent down. “Here, girl.”

The dog rose and stepped forward on long elegant legs. She was silvery-grey and smooth-coated with a long nose and a pair of arresting golden brown eyes. Paul allowed her to sniff at his hand then stroked her head. The dog nuzzled his coat and then turned and surveyed Lord Wellington with some interest. Paul looked around at his chief and suppressed a smile at Wellington’s expression.

“Almost a year. She’s had some training and she has a very good hunting pedigree. One of our neighbours in Leicestershire breeds hunting greyhounds and I asked my brother to bespeak one of the next litter. Her name is Pearl, but you can change it if you’d prefer, she’ll learn.”

“No. I like Pearl. It suits her colouring.” Wellington held out his hand and after a moment, the greyhound stepped forward and sniffed. Wellington stroked the smooth head and scratched behind an ear, and the dog moved closer and leaned against his leg. Wellington was smiling.

“Happy Christmas, sir. If you’d like, we’ll keep her with us until you’re back from your travels. Nan can work with her, she’s good with dogs.”

“Thank you, I would appreciate that.” Wellington bent down still fussing the dog. “Pearl, General van Daan has probably paid an extortionate amount of money for a dog to keep an eye on me when he cannot do so. He is, as I have said, appallingly sentimental.”

Wellington gave one of his unexpected hooting laughs and got up. “I am, General. Thank you very much, it is the best Christmas gift I have received in many years. Is that General Alten I see arriving?”

Wellington gave the dog one final pet and made his way to the stable door to greet the German commander of the light division. Paul nodded to the groom to replace the barrier and followed his chief back to the party.