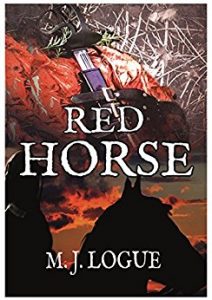 With M J Logue, you get two series for the price of one. The author, who writes historical novels set in the English Civil Wars and the Restoration, has created a family of characters who move from one series to the other, with a collection of excellent short stories and novellas popping up in between.

I first discovered the Uncivil Wars series just over a year ago, when I was in hospital and then convalescing after a foot operation. It should have been a fairly miserable time, but it passed in a bit of a blur for me, as I read my way through the series. Part way through, I contacted the author for some clarification about the best order to read them in. That conversation has been going on pretty much ever since, discussing everything from writing to cats and a few other topics to odd to describe.

The hero of the Uncivil War books is a Parliamentary cavalry officer by the name of Hollie Babbitt. Hollie isn’t your typical dashing officer type, to be honest. A former mercenary with an attitude problem, I imagine most of his senior officers must have spent a fair bit of their time with their head in their hands. Hollie, to tell you the truth, is a bit unpredictable at times, and it’s that which makes him such a fabulous character to follow through the bloody chaos of the Civil Wars.

Battles, hardship, history, romance – these books have everything. They just don’t have them in quite the same way that a lot of other books do. Hollie’s love story with his unglamorous Essex housewife is down-to-earth, unromantic and extraordinarily touching. Equally well drawn are his relationships with the scruffy collection of reprobates he commands, particularly his two junior officers, Luce Pettit and Thankful Russell. These three characters form the backbone of the series, with Luce’s wide-eyed idealism and Russell’s scarred, drunken disillusionment making them part of a perfect triple act with their irascible commander.

There are no heroes in these books, and yet every character is a hero in his or her own, undistinguished way. Be warned, once you start reading them, it’s very difficult to stop. 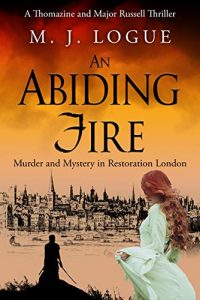 The same can be said of the author’s Restoration novels. Major Thankful Russell is back, serving the restored monarchy, a soldier reaching middle age, and finding himself in trouble and in love, with his former commander’s straight-talking daughter. Thomazine is twenty years his junior with a mind of her own and is determined to join her husband in every mad-brained scheme that  his work as a government intelligencer gets him involved with. These books are currently being reissued, with the first book, An Abiding Fire, due out in January.

The Russell series can be read on its own as an excellent historical mystery and adventure series, although I think reading the Uncivil War books first, brings an extra dimension to understanding the characters. Both series are funny, emotional and exciting, bound together by an extraordinary knowledge of the period and an exhaustive amount of research. They are among my favourite historical novels.

M J Logue’s books are currently available on Amazon kindle. If you’ve not tried them yet, I really suggest you do, but be warned, you may find you get very little else done for a while.