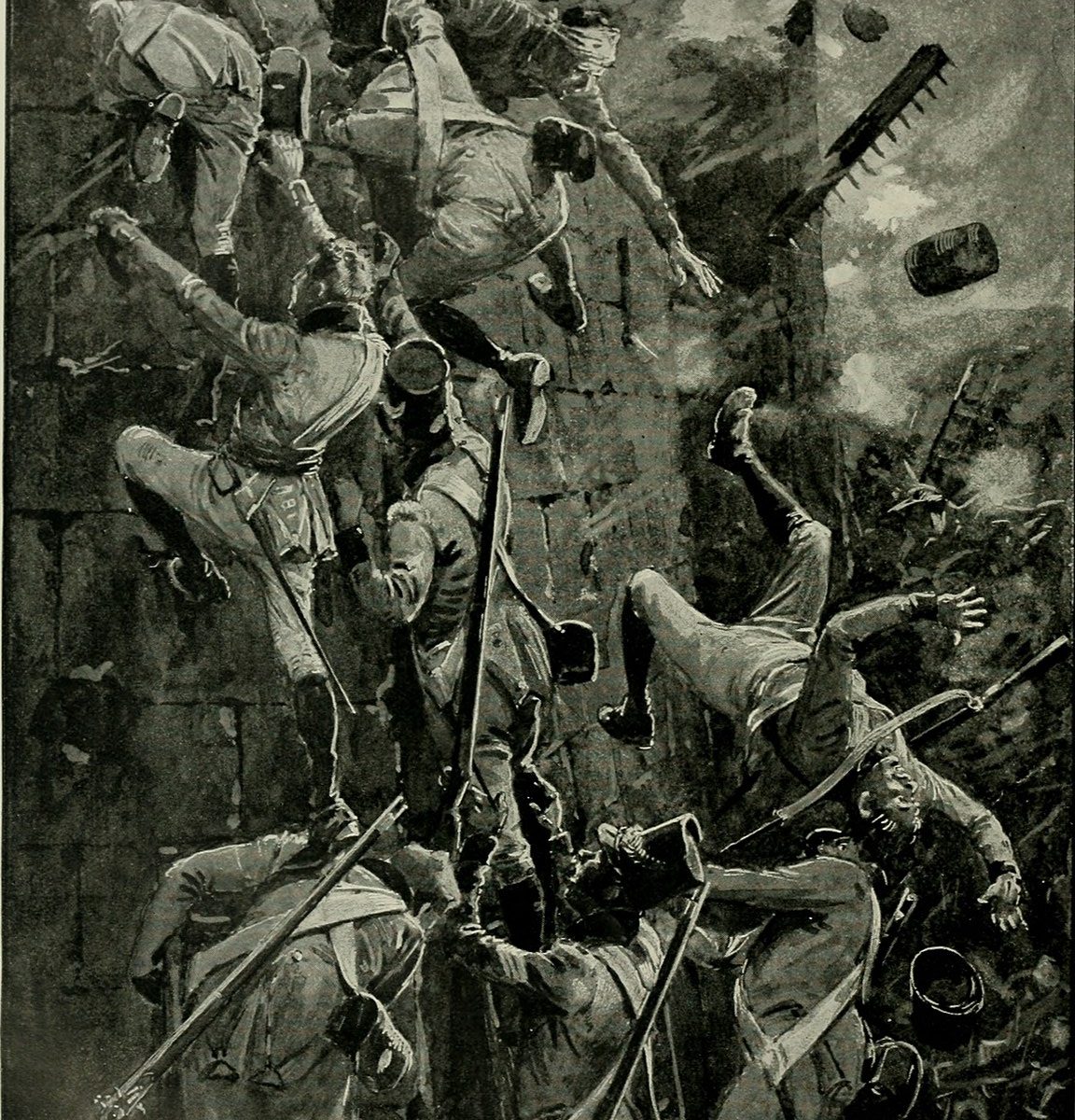 The final day of our trip was spent in the fortress town of Badajoz, which finally fell to Wellington on 6th April 1812 after previous attempts had failed. 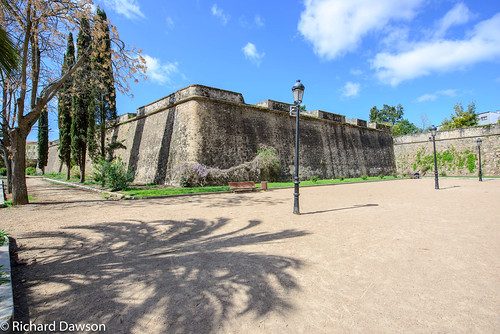 With the sounds of battle filling the air Paul looked over at Wheeler and nodded.  “All right, we’re going in.  Carter, pass the orders back quietly.  No sign of life over here, I’m hoping they’re looking the other way but they’re up there, trust me.  Let’s get those ladders to the front.”

Following their officers, the third brigade moved quickly and quietly over the ground.  At their head were the ladder parties.  Each group had been given very specific instructions about the placement of the ladders and Paul watched approvingly as they ran down towards the ditch.

He had given orders for them to pause at the edge and the men of the 110th and 112th light companies moved ahead throwing lighted bales of hay into the darkness.  The flames lit up the ditch garishly and Paul’s sharpshooters dropped into position, rifles pointed at the battlements.  There were shouts in French from the ramparts as the French realised that their section of the wall was under attack and Paul surveyed the ditches in the flare of the bales.

“Chevaux de frise,” he said in matter of fact tones.  “All right, Carl, keep up that fire.  Get the lads to take down as many as you can while we’re hanging around.  Skirmish formation – one fires and when the French fire back the other shoots at the flash.  Ten minutes of that should keep them busy.  Hammond, get me some volunteers to go down and haul those bloody things out of the way the minute the flares go out.  Preferably men who can see in the dark and have a brain.”

Above in the darkness the fire from the defenders was increasing and Paul kept a wary eye on the range as a dozen men scrambled quietly down into the blackness of the ditch armed with ropes to drag the chevaux de frise out of the way.  In the distance the noise of battle had grown louder and Paul wondered how the rest of the division was doing in the breaches.

There was a sudden explosion of light and sound and screams of pain from a section of his men and he swore softly.

“Nearly there, sir, three men down but they’re too late.”

“Good news!”  Paul turned to yell orders and his brigade, silent and still in the night, exploded into sudden action.  More hay bales were lit and in the flare of their light he looked down and saw the path through the ditch was clear.

“Advance!” he yelled, and the ladder parties scooped up their burdens again and continued their run under covering fire from the rifles of his sharpshooters.

He had known that the chances were high that the ladders would be too short to reach the top of the wall for most of it’s length but there was one stretch of the curtain wall which was much lower, having been previously damaged and not built up to it’s full height.  It was to the right of his position and the risk of mining was higher, but if he could get a small force up onto the ramparts there, they could hit the defenders in the flank and distract them for long enough to allow the ladder parties to scramble up.

On his orders, his men advanced in immaculate order.  The main ladders were swung up to the walls with men below steadying them to give maximum height and support, and his men swarmed up at speed.  Above him, Paul heard cries in both English and French as the first men reached the top and he realised with a spurt of triumph that the ladders had reached and that his men were fighting at the top.  Already bodies were falling and he knew some of them would be English.  With the defenders busy he turned and called out to Carl, who began his run towards the lowered section of the wall with his chosen companies.

It was going well.  Paul had the sense that his men were following orders and although many of them were coming down off the ladders, they were replaced immediately by more scrambling up.  The sounds from the breaches had faded from his consciousness now that his brigade were engaged and he waited for another ten minutes and then moved forward.

“Out of the way, Mr Heron before I kick you.  Don’t worry, I’m not going to stand at the top waving a flag.”

There was laughter amidst the blood and fire and slaughter and he set his foot on the ladder and began to climb.  Shot rained around him but he kept his body close in and was making good progress when his foot encountered a rung which felt unexpectedly shaky and he heard, from above, a yell of warning and then cries of fear.

Paul swore.  He could feel the wood giving way under the weight of men.  It often happened and he knew the danger of falling onto the bayonets of the men below him.  Pushing himself back he jumped into thin air and braced himself.  The leap took him over the heads of the men below him and back to the edge of the ditch.  He felt the impact jar through his body and he rolled over and slid back down into the ditch, feeling the bodies of injured and dead men crashing around him.  As he came to a halt something ripped into his hip and he dug his heels into the ground hard to stop his slide and found himself crushed by a press of fallen men into the edge of one of the chevaux de frise which had been dragged out of the way earlier.

(From A Redoubtable Citadel by Lynn Bryant, Book 4 of the Peninsular War Saga)

At Badajoz, I finally felt it.  After over a week of travelling around Portugal and Spain visiting locations and potential locations for scenes in my books, I’ve seen some beautiful and amazing places and I’ve felt at times as though I could imagine my characters being there, living their lives in the shadow of death.

Badajoz is not beautiful.  It is certainly in a beautiful setting and there are quiet spots in the town where you can get the sense of the old walled fortress town which existed in 1812 when Wellington’s army, on it’s third attempt, managed to batter down the walls and fight their way in.  Badajoz is a modern town.  There isn’t the sense of history, the sense of the past preserved that you get in Ciudad Rodrigo or Elvas.  There is the sense of people going to work and having lunch and living their lives.  Badajoz is just an ordinary town in Spain with an interesting history. 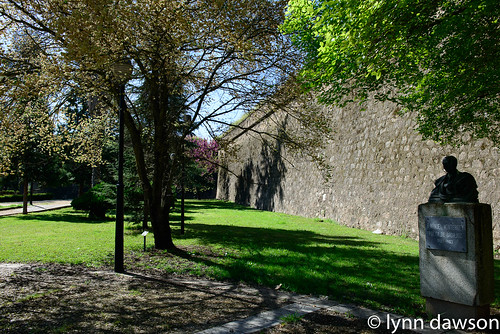 Maybe that’s why it worked for me.  Standing beside the walls, reading the guide which explained in matter of fact words that the road I was looking at went through the breach and that during the storming it would have been piled high with rubble and with thousands of dead and wounded Allied soldiers, I felt a genuine sense of horror.  It doesn’t seem possible now that those men on both sides of the wall, fought and bled and died on ground which is now just a road going into town. 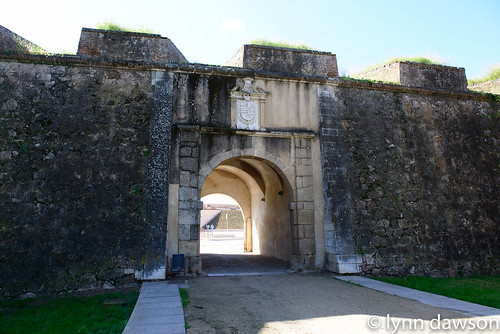 The horror didn’t end there.  When the Allies finally broke in leaving over a thousand dead and another three thousand wounded, heaped on top of each other in the breaches or below the walls, the English army went mad.  It was an accepted custom of war that if a citadel under siege fails to surrender and has to be taken by storming, the troops were allowed to sack the town.  This is horrific enough under any circumstances, but in 1812 the Spanish population of the town, although some were pro-French, were for the most part innocent civilians of a country allied to Britain in the fight against Napoleon.

It didn’t save them.  For almost three days the men of the British army ran riot in the town.  Murder, theft and rape were committed openly and anybody who stood in their way, including some of their own officers, was at risk of being shot down.  Eventually Wellington, appalled at the destruction and violence, set up a gallows in the square as a threat to the drunken men and the chaos died down.  But during those days it must have been hard for the Spanish to feel a sense of gratitude that their city had been liberated from the French.

I felt it more strongly in this noisy, modern town than anywhere else.  I felt sad for those men coming down off the formidable ramparts to add to the piles of dead below.  I felt a sense of the waste and the agony and the bloodshed.  Perhaps it’s because so little actually remains, it’s as if they’ve been forgotten.  Perhaps it’s because it was our last day and then I was going home and back to reality.

It took a while to pull myself out of nineteenth century Spain and Portugal on the journey home.  I couldn’t wait to get back to work and write the next book.  And of all the places I’ve visited I’m not sure I’d go back to Badajoz.  Not because it was a noisy modern town where history has vanished in places.  But because in the places where it remains, I felt indescribably sad.