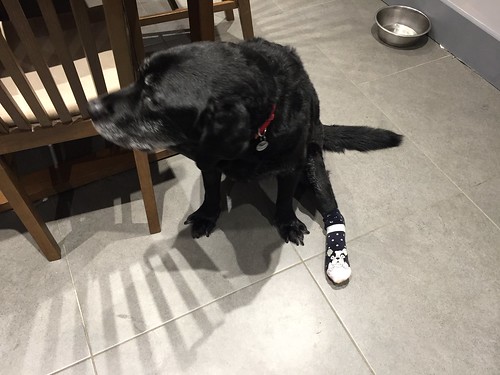 Welcome to blogging with labradors.

Hard to believe that this is called blogging with labradors and yet this is the first time I’ve been allowed my own blog post.  I mean, she’s very keen on posting ‘cute’ photos of us but do we get a say?  No.

Today she’s finally agreed to let me dictate my own post.  She can’t do anything else really.  I’m still recovering from my recent operation and while I’m lying around looking cute in her socks, she’ll let me get away with pretty much anything…

So, first a little about me.  My name is Toby, one of the two stars of Blogging with Labradors.  I’m thirteen and a black labrador, born on the Isle of Man up in Ballaugh although my Dad was an Irish show dog. She makes a lot of jokes about the Irish in me, but she’s laughing on the other side of her face at the moment since she just got back the result of her Ancestry DNA test and has discovered that she’s 11% Irish herself.  It explains nothing except the strange sense of humour and a somewhat dodgy taste for Irish folk music, but there you go.

I share the house with a family of four humans and another labrador called Joey who was adopted two and a half years after I arrived.  Joey is Manx and from a line of working dogs, which means he’s not as good-looking as me, although he’s not bad I suppose.  He used to be the energetic one, although he’s got so fat these days that his nickname is either Fattums or the King of Chins.  He’s supposed to be on a diet, but that’s a bit of a joke because he’s the most talented food thief I’ve ever met.  Generous too, he’s always willing to share what he gets down off the kitchen counters. 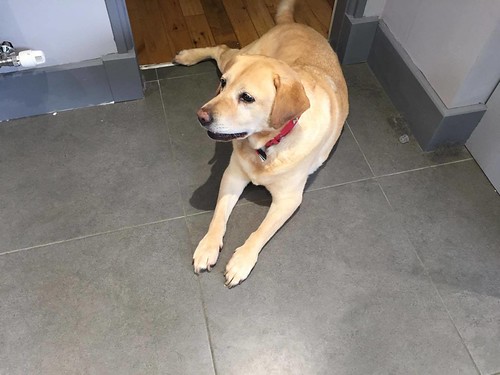 My humans are all right really.  I like the young ones best.  They’re always willing to stop whatever they’re doing, especially if it’s homework, and get down on the floor to give me a bit of a hug or a tummy tickle.  They also make a lot less fuss about dog hairs than the older ones.

Both the senior humans do something called “working at home”.  This seems to involve endless hours sitting at desks staring at a computer screen although how much of it is work and how much is scrolling through cute dog photos on Facebook and twitter is anybody’s guess.  I don’t really mind, because since she started working at home, I’m never without company.  She’s moved our beds into the study with her and we pretty much spend our days in there while she mumbles rubbish about Wellington and the battle of Badajoz at the screen and piles up books on the floor because she’s run out of space on the desk.  Sometimes we go and lie on the books, just for a laugh, and pretty much every one of them has dog hairs in it and at least one muddy paw print…

We live in Douglas on the Isle of Man which is a great place to live as a dog since it’s full of beaches, glens, rivers and great smells.  At my age I don’t walk that far, I’ve got arthritis, but I do like to get out and have a mooch around and a good sniff.

During the past year, she’s started writing books.  To be honest, she’s been writing books for years but she’s started publishing them.  I have to say I mostly approve since it keeps her quiet and out of mischief and means she spends more time with us.  I also like the website and blog, since a bit of publicity never does a labrador any harm, and I’m glad she’s acknowledging how important we’ve been to her success so far.

The thing that has bothered me is that up to now none of these books seems to have had much of a canine element.  I mean I know they’re historical novels, but people have had dogs for a good few years now and I can’t believe she’s neglected this important aspect of the human condition.  It’s true that there is a brief mention of a hound in “A Marcher Lord” but he barely gets a few lines and there’s no character development.  It’s a shocking omission. 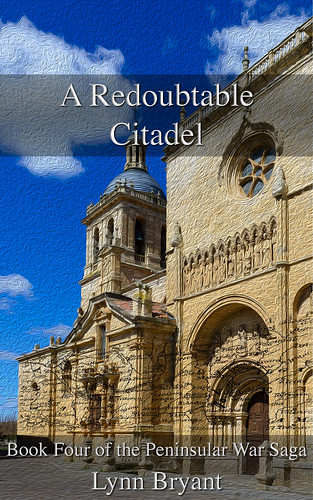 The most recent book is called “A Redoubtable Citadel” (where does she get these titles from) and it is published today.  It’s the fourth book in a series set during the Peninsular War.  I don’t know much about war and I’ve never thought it made much sense when you can eat or sleep instead, but people seem to like these books.  However the crucial thing about book four is that she’s finally come to her senses and introduced a dog.  It’s early days yet, but I think this one has the potential to be an important historical figure.  He’s got a good military name and I think he’s going improve the lives of the main characters no end by scattering dog hairs all over their uniforms and leaving muddy paw prints all over the tent.  I can’t wait.  Although apparently a few other things happen in this book, like battles and whatnot…

Other than that, the only other excitement in life at the moment is regular visits to the vet.  I had an operation a few weeks ago to get rid of an annoying lump on my foot and they’re all kicking off because I keep chewing off the dressings.  I’m not sure what else they expected, those things are uncomfortable.  This sock does seem to be a better solution so far and I must say I’m enjoying making a fashion statement.  She’s got an endless selection of attractive socks for me to work my way through.

I’m signing off now.  They’re cooking brunch and I’m hoping to cadge a bit of bacon if there’s any going but don’t worry I’ll be back soon on Blogging with Labradors with more musings on life with labradors… 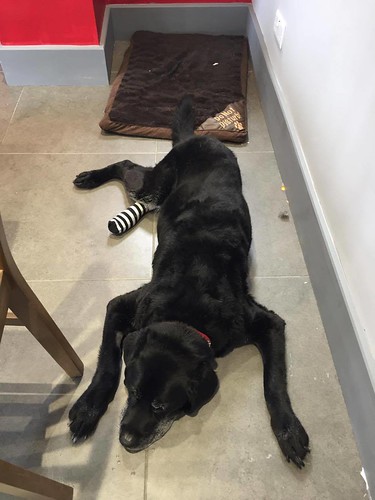