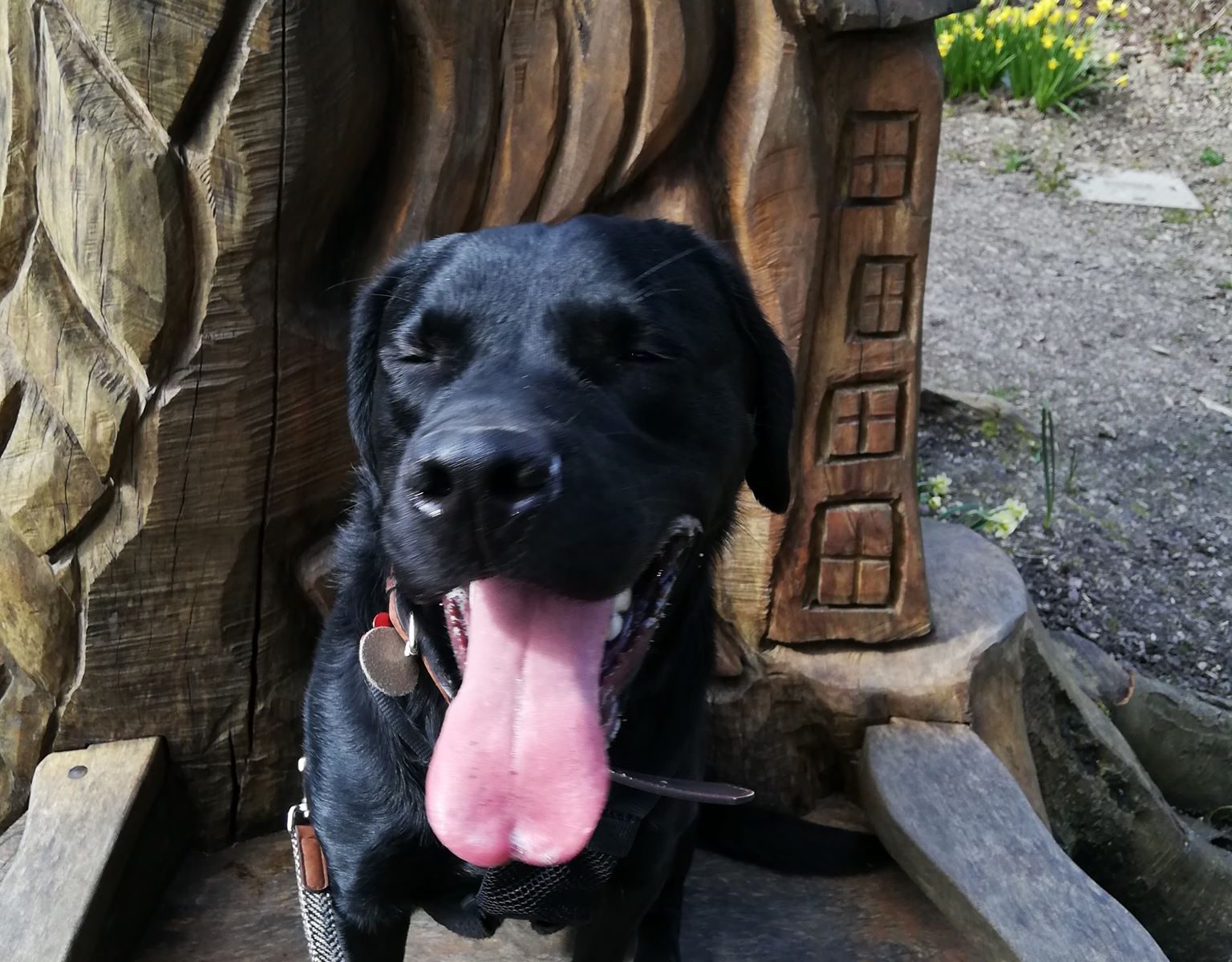 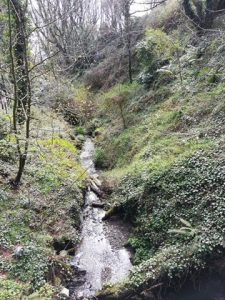 Summerhill Glen #OscarWalks is the first post Oscar and I have done for some time. We’ve been out for walks, of course, but I’ve been away a few times and Oscar had his little operation, which meant we’ve not been out and about around the island as much as we’d have liked. Needless to say, we’re going to be a bit limited for a while, but even close to home, there are some interesting places to go, and one of our favourite places for a daily walk is Summerhill Glen, which is only five minutes from our front door.

“We are, Oscar, but I’m afraid we won’t be able to play with any other dogs at the moment. I doubt there will be many about.”

“No, it’s very quiet. I like the quiet, though. Not so many scary cars and lorries on the road. Easier to cross.” 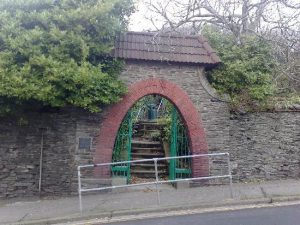 Summerhill Glen has two entrances.  The top entrance is on Victoria Road near Governor’s Bridge, and the main entrance is on Summerhill, just up from Douglas Prom. It was apparently originally named Glen Crutchery. The water from the river was used to provide power to a snuff mill on Strathallan Crescent, but the mill burned to the ground in the late eighteenth century. The road became known as Burnt Mill Hill, and then later, Summerhill from a mansion house at the bottom of Blackberry Lane.

In 1833, the glen was purchased by Douglas Waterworks to provide water for the first Douglas reservoir. The reservoir was still in use in the 1970s, to provide water for washing down the prom, but after a fatal accident, the reservoir was filled in although it is still possible to see where it was. The glen as we know it today was developed in 1932-1933 by young men aged between 18 and 22 on a ‘work for the workless” scheme.  It was then leased by Douglas Corporation. Initially, there was a proposal to call it Waterworks Glen but this was rejected in favour of Summerhill Glen, which I personally think was a good decision.

Summerhill Glen is a beautiful little oasis close to the centre of Douglas, with a series of paths leading between trees and shrubs, alongside a stream with a little waterfall. In the 1980s a fairy grotto was created, and this has been upgraded several times since then, with carved wooden seats and illuminations during the summer season and at Christmas and Halloween. 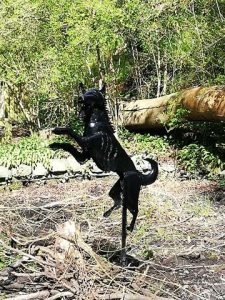 “I didn’t like the Halloween lights, Mum. That dog.”

“You mean the Moddey Dhoo, Oscar? You got used to him.”

“I know. I don’t mind him now, but when I first saw him, with all that fog around the marsh, and that howling noise, he frightened the life out of me. Now, I just think he reminds me of old Toby.”

“Toby and Joey both loved this glen.”

“And who wouldn’t? There are trees and flowers and bushes and mud and water and ALL THE SMELLS!!!!!”

“There are also a lot of steps and it’s quite steep, Oscar, stop pulling.”

“Sorry. Got a bit excited. What’s that?” 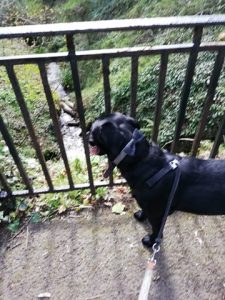 One of the advantages of the glen for us, is that we can walk down to the prom and the beach from home. It’s possible, during the summer months, to take the horse drawn tram from the bottom of the glen right down into town, which is a picturesque, if not particularly speedy way to get to the shops. Alternatively, we can just walk along the prom, or take Oscar onto the beach. 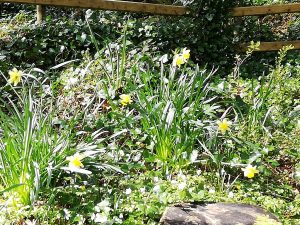 Spring is particularly lovely in the glen, with daffodils and wild flowers forming splashes of colour in the middle of the dense green of the vegetation. The main path is very good, although some of the side paths can get a bit boggy and slippery which can be an issue with an over enthusiastic labrador. Oscar has got so good on the lead now, though, that I don’t have to worry about him.

“You have. There were some in the little fort on St Michael’s Isle. I believe these are here because there used to be some kind of fortification here as well, to defend this part of the island.”

“It’s a shame you can’t use them against this virus-thing.”

“Isn’t it just, Oscar? Right, are you ready to walk back up?”

“Yes. Can we look at the fairy doors?”

“We can. We should get two with Toby and Joey’s name on one day.”

“I like it down here at night, when it’s all lit up. Will that happen this year, Mum?”

“I don’t know, Oscar. It’s a bit different this year, they might not have the summer illuminations. But I think we’ll be back on for Halloween and Christmas.” 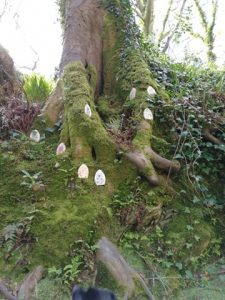 “Christmas was my favourite, it was like magic. I’m sure some of those lights looked like fairies.”

“They really did, Oscar. You tried to chase the moving ones. Beautiful. We’ll keep an eye out for the summer though, they might be back on around August time.”

The fairy doors throughout the glen were created by local schools, play groups and other organisations, and they give a real sense of magic to the glen. It’s a favourite activity for  local children to run through the glen spotting new doors and reading out the names on them. Oscar always gives the ones he can reach a good sniff, but he takes them in his stride, unlike my old fella Toby, who always took exception to ANYTHING NEW on one of his regular walks. Over the years, in addition to the fairy doors, he was know to lose it with such disparate items as new rubbish bins, a new bus shelter, a statue of a pig in somebody’s front garden and a Christmas tree on the quay. Toby didn’t like change, whereas I think Oscar has a sense of adventure.

“I remember coming here when I was a puppy. I loved this tree, there are so many different carvings on it.”

“You were a lot smaller then, Oscar. You couldn’t get up onto this seat back then. Want to have a sit down?”

“Right, let’s get home, Oscar. I need to get some work done.”

“Will Jon be there?”

“And Dad and Rachael?”

“Everybody’s working at home for a while, Oscar, they’ll all be there.”

“That’s great. You know, it’s a shame we can’t go far, Mum, but this lockdown isn’t all bad, you know… I think I’ll cuddle my owl when I get home and have a nap.” 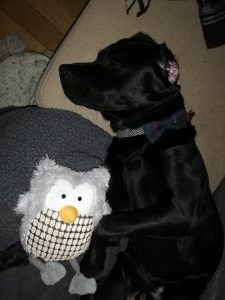 Oscar and I will be keeping closer to home for a while, but we’re looking forward to the challenge of finding some interesting places for #OscarWalks to investigate nearby.

Don’t forget that there are eight short historical fiction stories available here, which will give you a flavour of my writing and give you something to do during lockdown.