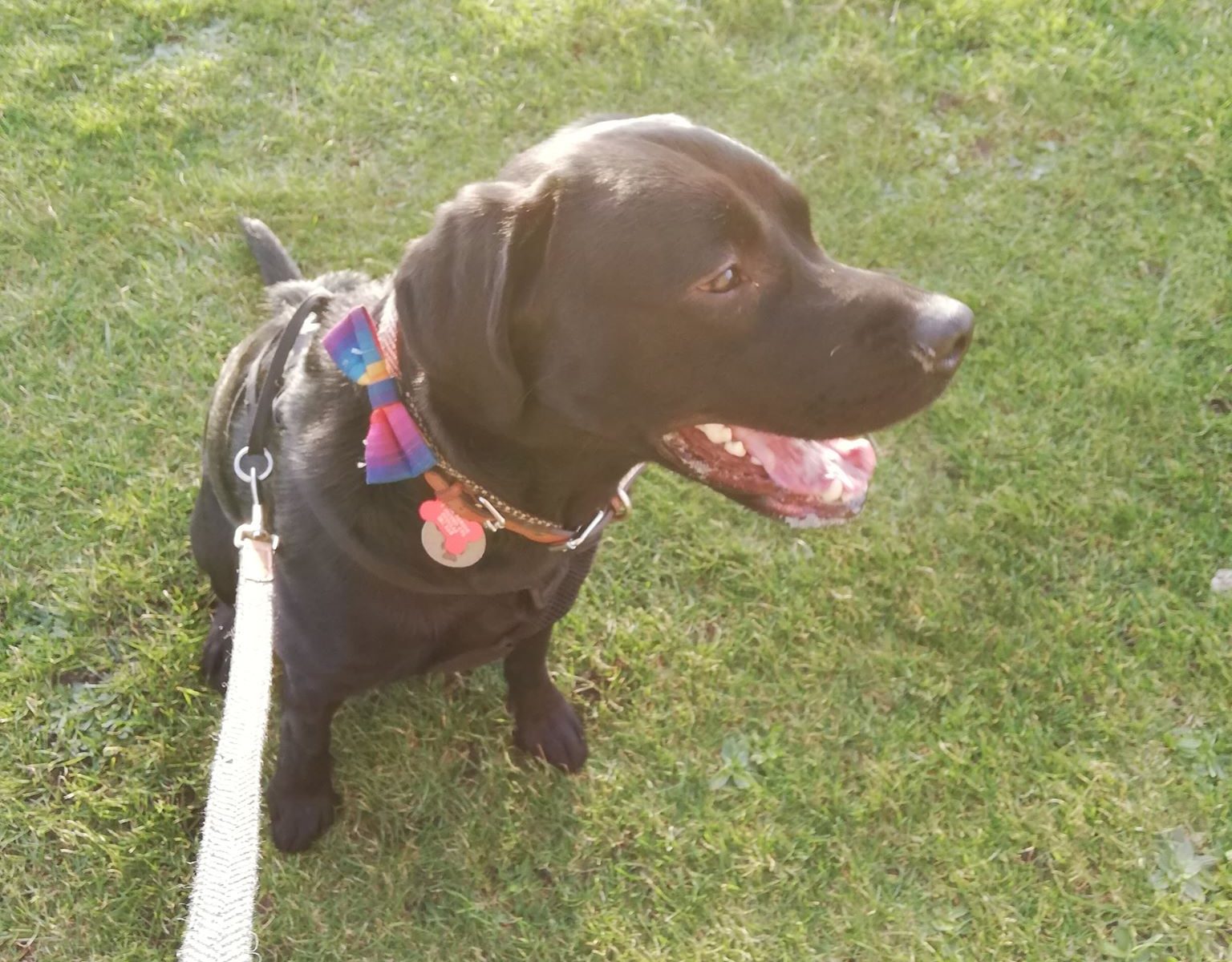 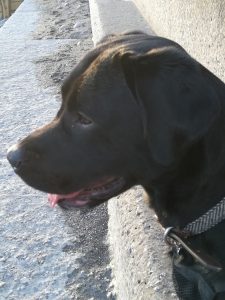 Good weather gave us the chance for a beautiful walk in the south of the island. Oscar was on the lead for most of the way, but was able to have a couple of off-lead runs which he loves. I have to tell you in advance that he was a VERY GOOD BOY today.

St Michael’s Isle, also known in the past as Fort Island, is about 400 metres long and is just off the Langness Peninsula, joined by a narrow causeway and it features in An Unwilling Alliance, when Hugh Kelly takes Roseen to visit. It’s a beautiful place, covered in springy grass and vegetation, surrounded on all sides by a rocky coastline. I’ve been there in a high wind and it’s a wild place, but today was sunny and calm, although freezing, and there were few people about.

“A few times, Oscar. The last time we came, Anya was with us. And Joey.”

“I really do. We were so concerned about you, we kept you on the long lead, but we let him off. He gave us one look and then started waddling at high speed right towards the rocks and Anya had to run after him.”

“He was after a swim, he loved swimming. Can I swim today?”

“Not here, it’s too rocky. Later you can go in at the beach.”

“That’s St Michael’s Chapel, Oscar. It was built in the twelfth century on the site of an older Celtic keeill.”

“A keeill. It’s a Manx Gaelic word for a chapel. Very old.”

“It looks it. What’s that other building over there. It’s broken too.”

“Ruined. Broken. Whatever. What is it?”

“It’s called Derby Fort, it was built in the 17th century by James Stanley, the 7th Earl of Derby who was Lord of Mann during the English Civil War, to protect what was then the very busy port of Derbyhaven.”

“Nowadays we have an airport, Oscar. Times change.”

“I suppose so. Can I look inside?”

“Through the gate, it’s not open. Over here.”

“Oh right. Like the ones at the bottom of Summerhill Glen?”

“I like it here. Lots of grass and rocks and sea and smells and…what are those flying things that I like to chase?” 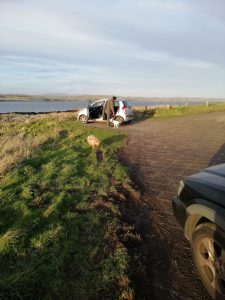 “Whew, that was fun. They’re not youngsters, those two, but they could run. Although that one waddled a bit like old Joey. Where now?”

“Let’s get your lead back on. We’re going along the coast towards Derbyhaven.”

The walk along the Derbyhaven coast was just over three miles and we were able to do a lot of it on the beach although retreated up to the path or the road where it was too wet or too rocky. Oscar loves the beach, but needs watching as bizarrely, he likes to eat seaweed. This was new to me; neither Toby or Joey would have dreamed of eating anything so nasty and smelly. Recently, Oscar has been learning the valuable command “Leave” and we had the chance to practice this a lot today. It went very well.

“It’s the back of the airport. When we go away, we sometimes go on airplanes.”

“That’s why I hate airplanes. You should stay here. What’s that big building over there. It’s not broken.” 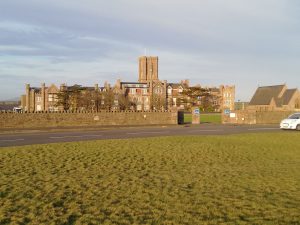 “Ruined. No, that’s King William’s College. It’s the only public school on the island. Which really means it’s a private school, because you have to pay to go there. I’ve never really understood that.”

“Not an interesting place then. What’s that?”

“It used to be a cafe and bar. I’ve never been in, but I think it’s closed down now.”

“Pity. We could have gone for tea. I like this walk.”

“So do I, it’s very pretty. Right, we’re going to turn back and go up to Hango Hill on the way back.” 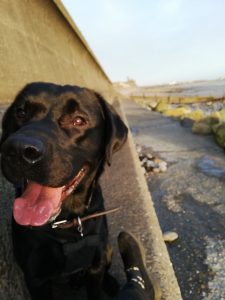 “What is it with you and seaweed? Neither of your brothers ate seaweed.”

“Try not to, Oscar, it’s really bad for your tummy.” 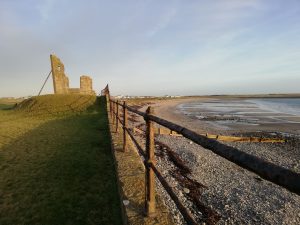 “It’s got another one of those broken buildings on top.”

“That’s them. You really like ruins, don’t you, Mum? Ruins and books. And dogs, of course.”

“Yes, that pretty much sums me up. Come and see, Oscar.” 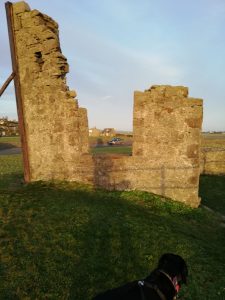 Hango Hill is a small mound by the side of the coast road between Castletown and Derbyhaven, overlooking the beach. It was possibly an ancient burial site and a Bronze Age flat axe was apparently discovered there. The name derives from the Norse words for Gallows Hill and was used as a place of execution until the seventeenth or possibly early eighteenth century.

The most famous execution to take place on Hango Hill was that of William Christian, also known as Illiam Dhone, (Brown William) for his participation in the 1651 Manx rebellion against the Derby family who were Lords of Mann at the time.

Christian was a Manx politician of his day and is seen variously as a patriot, a rebel or a traitor. He was appointed as Receiver-General by Derby and when the Earl left for England to fight for Charles II he left Christian in charge of the island militia. Derby was taken prisoner at the Battle of Worcester and his wife,  a redoubtable lady called Charlotte de la Tremouille, who held Castle Rushen for the King, tried to save her husband’s life by negotiating the surrender of the island to Parliament.

The ensuing rebellion, led by Christian in 1651, was partly due to national politics and partly due to local discontent at some of Derby’s new agrarian policies. The rebels took several local forts and Christian then began negotiations with the Parliamentarians. The Countess was forced to surrender Castle Rushen and Peel Castle, and failed to prevent the execution of her husband. Christian remained Receiver-General and became Governor of the Isle of Man in 1656.

Derby’s family did not forgive or forget. Fraud charges were brought against Christian, who fled to England and was imprisoned for a year in London. On his release he chose to return to Mann, believing that his rebellion against the Earl would be covered by the Act of Indemnity, but the new Earl immediately ordered his arrest. Christian refused to plead at his trial, was found guilty and executed by shooting on Hango Hill on 2 January 1663.

“So what was this place before it was ruined, Mum?”

“I’m not sure, Oscar, but I think it’s the remains of a kind of summerhouse used by the Earl of Derby. It was built after Illiam Dhone’s execution. They used it as a banqueting hall as well, and used to organise horse racing along these dunes towards Langness. I read somewhere that these were the very first “Derby” races. I suppose that’s when they stopped using it for executions.”

“Shall we come down here one evening and see?”

“Not funny, Mum, you know what I’m like in the dark. What does that writing say?” 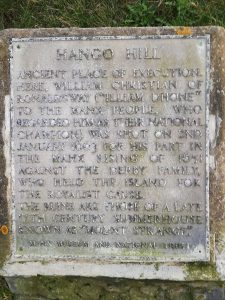 “It’s just a little bit about the history of the place and Illiam Dhone. Each year, on the anniversary of his death, they have a gathering here and make a speech in the Manx language.”

“I’m surprised you don’t come, it’s the sort of thing you’d do.”

“I might one year. It’s always so cold in January, though.” 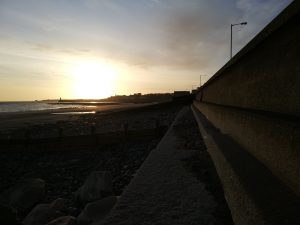 “It is. The light’s starting to fade as well, I forget how early it gets dark. Right, back to the car then, we’ll be warmer if we’re walking.”

“Probably almost six miles with all the detours and the running around on the beach and the island, Oscar.”

“That’s a long way. I’m going to need a long sleep when I get back. And dinner. I’m starving.”

“Have a biscuit, then. You’ve been such a good boy today, Oscar, I’m proud of you.”

“Thanks, Mum. Won’t be going out next week much, I suppose?”

“No, you’ve got your operation on Friday. But it won’t take long to recover and the weather will be getting better soon. There’s the car. Hop in, baby boy.”

Look out for more #OscarWalks posts to come and if you enjoyed this and want to hear more from Writing with Labradors, or find out about my books, why not follow me on Facebook,Twitter,  Instagram or  Medium?